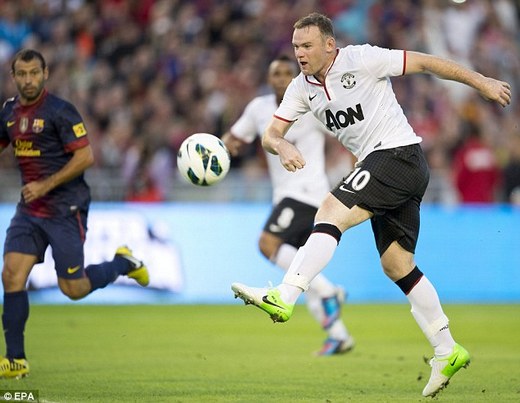 Manchester United were beaten 2-0 by Barcelona in a reduced penalty shoot-out, following 90 minutes of stalemate at the Ullevi Stadium in Gothenburg, Sweden.

A second successive goalless draw on the DHL tour was due largely to two goalkeepers. Victor Valdes saved Wayne Rooney's penalty in first-half stoppage time while David De Gea was in outstanding form against his fellow countrymen in his first appearance for the Reds this pre-season.

Barcelona were dominant in terms of possession from the first whistle with De Gea forced into action to thwart Andres Iniesta inside the opening minute. Lionel Messi was inches away from converting a majestic lofted pass by Iniesta moments later and the Argentinian maestro provided Cristian Tello with a decent opening that was sliced wastefully wide.

After weathering the early storm, the Reds started to respond but Rooney and Nani's attempts failed to trouble Valdes following passes from right-back Antonio Valencia and Paul Scholes respectively. Scholes patrolled midfield with his usual swagger but Messi remained the biggest threat on the pitch as he forced De Gea into a splendid fingertip save following a menacing run forward.

Some sublime skill by Nani had the packed Ullevi crowd on its feet while a lunging foul on Sergio Busquets by Scholes divided opinion, with the United fans jeering the Spaniard for his reaction and the Barca supporters unhappy with the Reds veteran. Referee Martin Balko called it right when he produced the yellow card for the challenge.

Youngster Tello caused problems on the left with one cross hammered behind his own goal by Rio Ferdinand and another centre prompting a fine block by De Gea as Messi pounced, although the offside flag was raised in any case. Yet United finished the first half strongly, with Danny Welbeck defending well from the front and Scholes at his probing best. Ashley Young's inswinging corner almost caught Valdes out with Nemanja Vidic and Rooney unable to scramble in the rebound and Nani earned a penalty after being caught by Tello's careless tackle inside the box. With the clock ticking over into injury time, Rooney stepped up but saw Valdes parry out his spot-kick and the United striker slashed the rebound well wide with the goal gaping.

Undeterred, Sir Alex's side started the second period in impressive fashion with Valencia bursting forward to find Welbeck, who teed up substitute Shinji Kagawa for what was almost a dramatic introduction to the game but Jose Manuel Pinto, another half-time replacement, dived to save. Kagawa tested Pinto's reflexes again soon afterwards with a cross-shot but Barca passed their way back into the ascendancy.

Thankfully, De Gea was in top form as he kept out Dani Alves, although the Brazilian was offside as he latched onto Cesc Fabregas' slide-rule pass, before pulling off two wonderful stops in quick succession. The former Atletico Madrid No1 stood up well to Alexis Sanchez to win a one-on-one with the Chilean and then dived full length to tip a Pedro  header around a post.

Back came United with Nani unable to profit after being gifted the ball by Pinto and playing a one-two with Kagawa, as Marc Bartra nudged him to the ground inside the box, and the Portuguese winger was then booked, along with Busquets, after a flare-up after being tugged back when sprinting forward.

More substitutions interrupted the flow of the game and penalties appeared increasingly inevitable although Nick Powell and Scott Wootton came off the bench for the best experience of their fledgling careers.

With only three spot-kicks each to be taken, the Reds were up against it when Nani missed with the first effort from 12 yards. After Xavi despatched his attempt, Young's shot was too close to Pinto which allowed ex-United defender Gerard Pique the opportunity to beat De Gea and win the match. It will matter little in the overall scheme of things and there will be plenty of positives for Sir Alex to take from the occasion, witnessed by a crowd of 47,141.