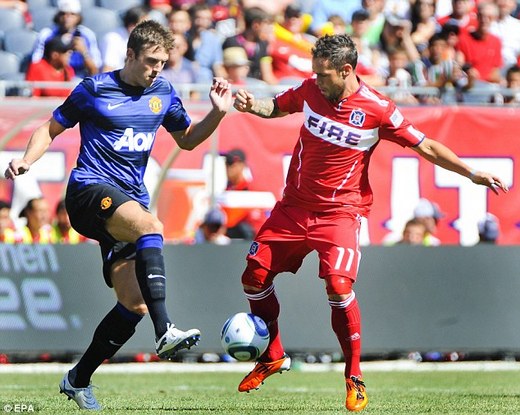 On a sweltering day in Illinois, Manchester United eventually proved too hot for Chicago Fire at Soldier Field.

A Cory Gibbs goal against the run of play gave the home team the lead on 13 minutes before second-half strikes from Wayne Rooney, Rafael and Nani handed Sir Alex's men a hard-fought victory.

Indeed, Chicago were the better team for long periods and but for some wasteful finishing would have won this content. But again, as in Seattle three days earlier, the Reds proved clinical in front of goal and reaped the rewards.

Played in baking heat, in front of  the largest ever crowd at Soldier Field for a game of club football, United were given a stern test by a Chicago side lying third from bottom in the MLS Eastern Conference.

Sir Alex handed first pre-season starts to the five players who joined the tour in Seattle, including summer signings David de Gea and Phil Jones. They were part of a young back five, with only Patrice Evra and Fabio old enough to leally drink in the US.

The Reds started well and carved out the game's first chance after five minutes. Danny Welbeck produced a sublime piece of skill to outfox three defenders on the halfway line before slipping a pass through the Fire defence for Dimitar Berbatov. The Bulgarian took his shot first time but Chicago stopper Sean Johnson did well to get down to his right and beat the ball away.

Given United's bright start, it was a surprise when the home side took the lead. Fire defender Gibbs outjumped Jones to reach a long Marco Pappa free-kick and head inside de Gea's right-hand post. There was little the Spanish goalkeeper could do to prevent the goal, Gibbs' first in a Fire shirt for more than a year.

The relentless heat didn't help the Reds, although Obertan and Fabio both blasted over from distance in the space of two minutes as Sir Alex's men upped the ante. Welbeck was perhaps the pick of United's players in the first period - he showed good close control, made clever runs in behind the Fire defence and linked well with Berbatov and Diouf.

Cristian Nazarit almost put the Fire 2-0 up when he blasted low and narrowly wide after half-an-hour, while Pappa also tried his luck from distance. United, it must be said, failed to exert much influence on the first-half contest after the Fire's goal and were lucky to go into the break just one goal down. Indeed, it took a stunning reflex save from de Gea - his first major contribution in a Reds shirt - in the 45th minute to keep out Patrick Nyarko's close-range effort.

The heat necessitated a raft of substitutions at the interval, with the Chicago crowd especially happy to welcome Wayne Rooney and Ryan Giggs into the game. The introduction of Jonny Evans for Fabio shifted Chris Smalling to right back, while Anderson and Giggs came into the centre of midfield. Smalling had the ball in the net within two minutes of the restart but the goal was correctly ruled out for offside.

De Gea then made a routine save from a Pappa free-kick before Baggio Husidic spurned a golden chance to double the Fire's advantage. It was easier to score than miss and yet Baggio scuffed his shot from five yards with the goal gaping.

More substitutions were made on 56 minutes, although for a bizarre 60 seconds the Reds played with 12 men after confusion on the touchline meant three United players came on and only two left the pitch.

Rooney then stung the palms of substitute goalkeeper Jon Conway before Pappa hit the side-netting and Orr Barouch the post, courtesy of a smart finger-tip save from de Gea down to his right.

The Reds levelled on 66 minutes when Rooney latched onto a pinpoint long ball from Rio Ferdinand and lifted the ball over the onrushing Conway. It was Wayne's fourth strike on the US Tour and further evidence that the recent summer break robbed the forward of none of his predatory instinct in front of goal.

Ten minutes later, United were in front after Rafael and Nani combined down the right flank and the young Brazilian shimmied along the by-line and coolly squeezed the ball through Conway's legs.

Nani then added further gloss to the scoreline with eight minutes remaining when he profited from some generous defending and cheekily dinked the ball into the net. It was perhaps harsh on the Fire who, until they began to ring the changes midway through the second period, looked likely winners in this contest that will live long in the memory of Chicago soccer fans.