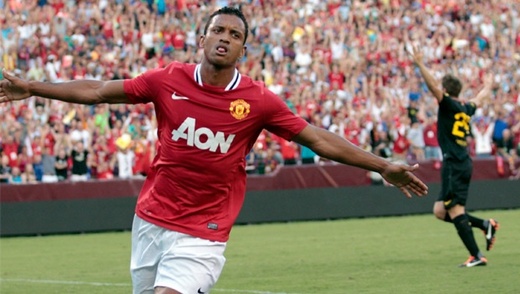 No Messi, no problem. Two months after Champions League final heartache, United fans finally had something to celebrate against Barcelona, as the Reds beat the European Champions 2-1 at FedEx Field in Washington DC.

Without their Argentinian playmaker (or Xavi, Dani Alves, Javier Mascherano, Gerard Pique and Carles Puyol), Barcelona lacked much of the creativity and movement that tore the Reds apart in May's Champions League final.

Of course, this game didn't matter quite so much, despite local media billing the game as a Wembley rematch and a chance for United, apparently, to “exact revenge” for May's painful defeat.

In reality, though, this was merely a pre-season run-out for Sir Alex's men, albeit a vital one with the Community Shield clash against Manchester City just eight days away.

United, at the end of a three-week stint in the States, started brightly and Rooney should perhaps have opened the scoring on 10 minutes when Nani whipped a dangerous ball across the box from the right. Rooney edged in front of his marker at the near post but blasted his low shot wide of the post.

Barcelona – shorn of their South American stars, including Lionel Messi -  enjoyed a spell of short dominance after Rooney's miss, although failed to test Reds goalkeeper David De Gea. One deep cross from the right did force Fabio, on as a substitute for his injured brother (knee) on 17 minutes, to head behind for a corner, however.

With the Catalan side committed forward, the Reds cleared the set-piece and broke quickly down the pitch. Danny Welbeck slipped a pass between two Barcelona defenders for Nani to chase and when the Portuguese wide-man collected the ball he kept his cool to steer home United's opener via the gap between Victor Valdes' legs.

It was classic counter-attacking football from the Reds, the sort of which United fans saw far too infrequently in the last two Champions League finals. Instead, those games will always be remembered for Barcelona's staggering possession play.

Here in DC, there was less of that on display, although admittedly the Catalans were missing keep-ball kings Xavi and Messi. The less savoury side to Barcelona's game remained, though. Ashley Young and Jonny Evans were caught by wild tackles in the first half, while Sergio Busquets and David Villa both made the most of tame challenges.

Sir Alex made three changes at the break (an interval that featured basketball superstar Kobe Bryant taking penalties on the pitch) but it was Nani, United's liveliest player in the first 45 minutes, who continued to pose problems for the Barcelona defence whenever the Reds pushed forward.

At the other end, David De Gea's first save came just after the restart when he smothered Pedro's angled shot. Otherwise, the former Atletico Madrid stopper had precious little to do until the 70th minute when Thiago rifled a swerving shot into the top corner from 20 yards. There was no stopping that thunderbolt and the goal gave Barca a noticeable shot of confidence.

Six minutes later, though, United were back in front when Cleverley intercepted a stray pass and fed Michael Owen through the middle. The former Real Madrid forward – Barcelona fans won't have forgotten that fact – is usually lethal in one-on-one situations, and he made no mistake here, dinking the ball over Valdes to restore the Reds' lead.

United's win doesn't erase the memories of May's Champions League final or even strike a significant psychological blow in the battle for European football supremacy. It did, however, ensure Sir Alex's men remained undefeated in all five US Tour fixtures (scoring 20, conceding three), and provide a high-intensity finish to pre-season preparations.

Next up: the Community Shield. Bring on the Blues!