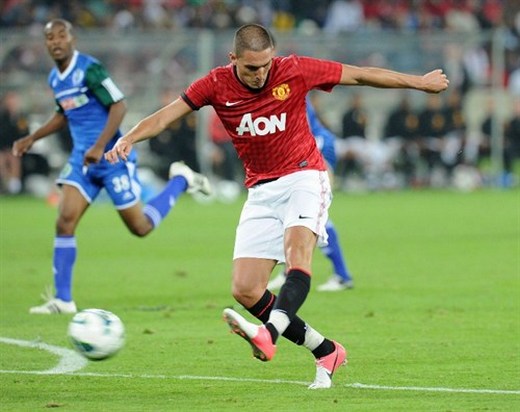 The Manchester United DHL 2012 Tour got off to a winning start in Durban on Wednesday night, as Federico Macheda's first-half strike edged an entertaining affair against AmaZulu FC.

Both sides created chances in an open encounter but ultimately it was a night where goalkeepers shone. United's Anders Lindegaard and AmaZulu's Taupwa Kapini made a string of superb saves to deny the capacity crowd more goals. In the end, they were probably the only two men who were pleased the net bulged just once.

Not that the Durban supporters left disappointed. The crowd were treated to some fabulous passing moves from both teams, a match played in generous spirit and a late cameo from summer signing Shinji Kagawa.

Fellow summer arrival Nick Powell didn't feature at all, although there were plenty of other new faces in the Reds' line-up. Frederic Veseli, Scott Wootton, Robbie Brady and Jesse Lingard all pulled on a senior shirt for the first time, with Marnick Vermijl, Tyler Blackett, Ryan Tunnicliffe and Davide Petrucci also claiming the honour when they came off the bench in the second half.

Played against the backdrop of celebrations for Nelson Mandela's 94th birthday, the match started brightly. Javier Hernandez spurned a golden chance inside two minutes following fancy footwork and a stinging shot by Macheda, while Paul Scholes thrilled onlookers with a series of clever passes.

Vuvuzelas - the droning horn that soundtracked the 2010 World Cup - were dusted off and blown with gusto throughout, ceasing only to give way to cheers when Macheda opened the scoring on 20 minutes.

Berbatov, playing in the middle of United's three-pronged attack, fed the 20-year-old superbly with a ball that required little more than a cool head and a firm strike to send it beyond Kapini. Down the other end, Lindegaard had to react smartly down by his near post to prevent Ayanda Dlamini from restoring parity almost immediately. The same tricky AmaZulu forward wasted a much easier chance just before the break at the conclusion of a sustained period of pressure from the home side.

It wasn't the final highlight of the first half, though. That honour fell to Berbatov, who drew an acrobatic save from Kapini with an outrageous volley from 18 yards, direct from Robbie Brady's corner.

The anticipated raft of half-time substitutions never materialised (AmaZulu made two, Vermijl replaced Veseli) so the Bulgarian continued to torment the South Africans in the second period. One early shot was cleared off the line; another drew yet more goalkeeping heroics.

Lindegaard's battle with Dlamini also resumed at the other end, with the Dane diving to keep out an effort bound for the far corner. An even better stop denied substitute Josef Lekata from close range.

There was mass confusion just after the hour mark when the referee pointed to the penalty spot after Blackett, on for Brady a few minutes earlier, tumbled inside his own box under a clumsy challenge from an AmaZulu forward. Sense prevailed after United's protestations, however, and the Reds escaped unscathed.

Petrucci rattled the crossbar from distance in the game's closing stages before Kagawa's eventual inclusion on 89 minutes earned the biggest cheer of the night.

As pre-season openers go, Sir Alex will consider this a success. He successfully juggled youth with experience to hand 17 players time on the pitch, gave new signings their first United minutes and, most importantly, none of his men sustained serious injury. No wonder he, along with more than 50,000 people, left the Moses Mabhida stadium smiling.