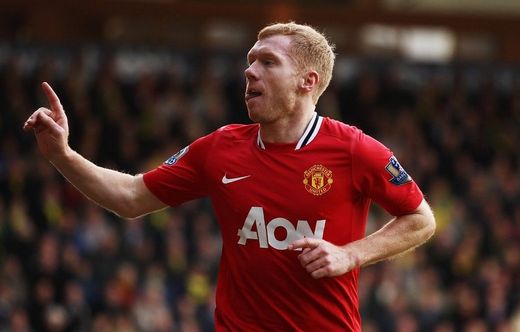 Paul Scholes says the champions realise three points could be essential from every match until the end of the season if United are to retain the title.

The midfielder was outstanding again in the dramatic 2-1 win at Norwich, scoring the opening goal, and explained to MUTV afterwards that the players realised a point was insufficient in the title chase when Grant Holt levelled with seven minutes to go.

The gung-ho approach reaped dividends in glorious fashion, as it has done so many times in the past, when Ryan Giggs tucked in the winner to spark delirious celebrations and move the Reds to within two points of leaders Manchester City.

"There's no doubt we had to win today and we might not have done after them equalising," Scholes stated. "There was a chance we could lose a second goal as well but we needed to win. There's no point drawing games so we were throwing everyone forward going for that goal, as we will do in any game, and I'm sure we will do the same thing again. It doesn't always happen but, today, it did.

"Of course, three points instead of one is a big difference. That's what we're here to do now. We realise we may have to win every game to win the league but we're ready and prepared to do that. Hopefully, we can do it."
a
Deflecting attention away from his own splendid display in typically modest fashion, he was happy to heap praise on matchwinner Giggs, his fellow veteran.

"I'm happy to be back and can hopefully go some way to helping the team do well," he said. "Ryan is amazing. Just to play that amount of games for a top club is a great achievement from him and he's still going strong as he proved throughout the game and, thankfully, getting us the winner in the last minute. It was almost as if it was written for him really. 900 games is amazing and to do it for one club and Manchester United is even better. To win us the game after they equalised, it was a great day for him and the team as well."

Scholes agrees with Sir Alex that United failed to hit top gear until the closing stages but the match was rescued in the nick of time and it could prove crucial in the title reckoning.

"He's probably right," added the midfielder. "I think we had a couple of openings in the first half and they were decent chances, but we didn't manage to put them away. At grounds like this, they are always coming at you if you don't get the second goal.

"It can be a difficult afternoon, as it proved with them getting their goal. We knew it was a difficult place to come and getting a start like that was great but, for one reason or another, we didn't really build on that. They managed to equalise but Ryan managed to save us."