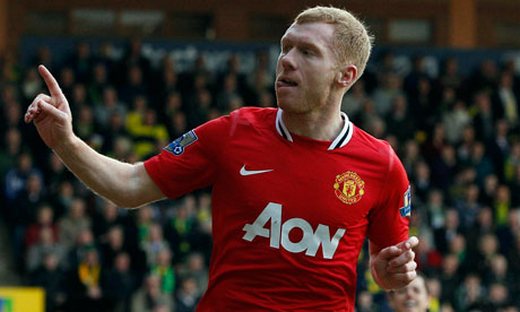 Paul Scholes believes Manchester United need to win all 12 of their remaining games if they are to secure the Premier League title ahead of Manchester City.

Scholes opened the scoring at Norwich on Sunday, the second goal of his 10-game comeback, but Grant Holt's equaliser with seven minutes remaining appeared to have earned the home side a point until Ryan Giggs popped up in injury time to win it for United. It was a victory which ensured they closed the gap on City to two points. United face City at the Etihad on 30 April and the former England midfielder feels that they cannot afford any more slip-ups .

"Getting three points instead of one is a big difference," Scholes said after United's sixth win in seven league games. "We realise we might have to win every game to win the league, but we are ready and prepared to do that. There was no doubt we had to win [at Norwich] and we might not have done after they equalised.

"There was a chance we could lose a second goal as well. But we need to win games. There is no point drawing matches and we threw everyone forward, as we will do in any game."

There was a touch of poignancy to Giggs's winner, in his 900th appearance for the club, as it came against the same side he scored his first goal against 21 years ago. Scholes was also quick to pay tribute to the Welshman, with whom he first played in United's first-team at Ipswich on 24 September 1994.

"It is amazing just to play that amount of games for a top club," Scholes said of his team-mate. "It is a great achievement from him and he is still going strong, as he proved throughout the game. Thankfully he got us the winner. It is an amazing story. It was almost as if it was written for him. Nine hundred games is amazing for a club like United – to do it at this level is even better. To win us the game after they equalised was a great day for him and the team. Ryan saved us."

Giggs also feels he still has important contributions to make for United, despite his advancing years. "It was a great day for me making 900 games," he said, "and to score the winner late on was fantastic, but most importantly it was an important win for the team. To play for such a great team and club like United, the team I supported when I was growing up, is special. I will keep going and hopefully there are more goals to come as well."