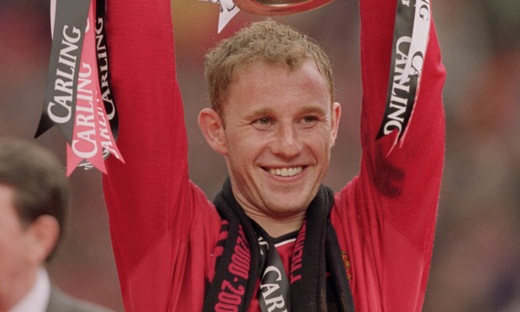 Nicky Butt pitted himself against some of the cream of world football’s midfield players for United.

He also clashed with the same world-class quality for England on the European and World Cup stage.

The costly engine-room assembled by Roberto Mancini has the Mancunian drooling – and also in awe.

“You can pick any combination from the choices at City and it is a quality, world-class department,” Butt told M.E.N. Sport.

“It is quite frightening the choice they have. It is a phenomenal squad and an incredible midfield unit.

“I have seen and played against a lot of great midfields. At United I played with and watched Roy Keane and Paul Scholes as a central midfield twosome and they were among the very best.

“But I have to hold my hands up and say City’s midfield is as good as any I have seen.”

Despite the daunting pedestal he places Mancini’s collection of Yaya Toure, David Silva, Gareth Barry, James Milner, Nigel de Jong and Samir Nasri on, Butt – who won the Treble in 1999 with the Reds – says United have nothing to fear at the Etihad on Monday.

Butt left Old Trafford in 2004 as a six-time title winner. Since his departure he has seen his former team-mate Paul Scholes go on to win four more Premier League medals.

That collection looked to have been completed last May when Scholes announced his retirement. But after his January U-turn, he has been the catalyst for United to claw back City’s lead at the top of the table. Now he’s on the brink of his 11th title and Butt believes he’s as good as anything in the Blues’ midfield.

“Paul Scholes is still one of the best midfield players in the world,” he said.

“City will be as wary of him as United might be of their midfielders.

“And I don’t think Michael Carrick gets the plaudits he fully deserves. I am a big fan of Michael because he can do so much.

“He has a good eye for a tackle, he can pass long and short with great accuracy and purpose and being a tall lad he’s good in the air as well. I just wish he would score more goals, then people might talk about him more.

“Nevertheless, he’s a great midfielder and works well with Scholesy.

“City’s midfield department is impressive but if you are to look at the central area individually, on paper I don’t think you can split the effectiveness of Scholes and Yaya Toure or the importance of Carrick and Barry.

“As good as I think City are in that area, I don’t think United should be frightened of them.

“I think they need to get in amongst them, get in their faces and don’t be scared of the occasion.

“I think the advantage United could have is that if Mancini plays three in the centre of midfield, which is probable, then United will have space on the flanks for players like Antonio Valencia and Nani to exploit. It would suit them.

“I would love to be playing in this one.

“I played in a few Manchester derbies but never one as big as this. I’d have loved it.”

Butt came through many United matches when the chips were down or backs were against the wall to emerge triumphant.

With City having home advantage and the momentum from last weekend’s extraordinary events in the title race, it’s arguably City who edge the derby as favourites.

However, Butt believes the Reds have one stand-out feature that can swing such occasions in their favour.
“United always get a result in the big games when they need one,” he said.

“And that is down to the manager.

“Sir Alex Ferguson buys the right players and the right characters and that never-say-die spirit gets ingrained in you.

“Training will be full on as it always is and you get your rewards from that intensity.

“When you get out on the pitch you carry the club’s history and traditions on your shoulders with you and the manager will only have players who can deal with that.

“The mentality and work ethic comes from him and on these occasions it comes through. “I just don’t see United losing on Monday night.”