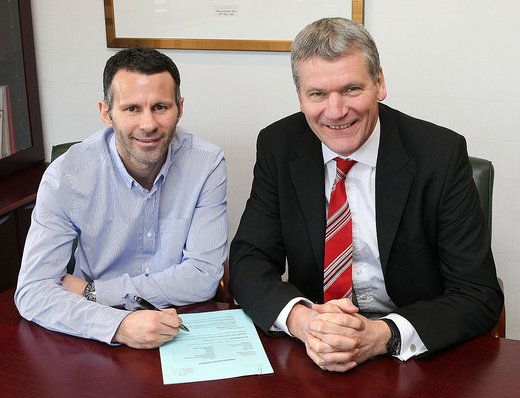 Ryan Giggs has signed a one-year extension to his contract, in a deal that will see the winger complete his 21st season as a first-team player.

Giggs signed professional forms with United in 1990, making his debut in March 1991.  In that time he has made a club record 862 appearances, scoring 158 goals.  He has won 11 Premier League titles, four FA Cups, three League Cups, two Champions Leagues, one Super Cup, an Intercontinental Cup and a Club World Cup.

Sir Alex Ferguson said: "You run out of words to describe Ryan Giggs.  He is a marvellous player and a wonderful man.  To have the desire and the ability to play at the top level in such a physically demanding position at his age requires a special person.  He is still turning in man of the match performances and his experience is so vital for the younger players in the squad."

Ryan Giggs said: "All I’ve ever wanted to do is play for United and I’ve been lucky enough to do that for 20 years.  It’s great to know I’m still contributing to the team’s success and I feel I’ve got a lot to offer on and off the pitch.  This is an exciting time to be involved with so many good young players coming through."