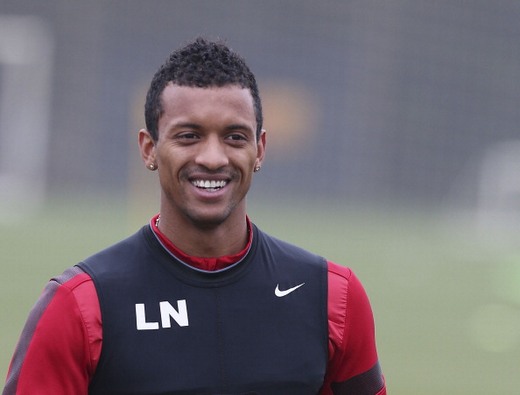 Nani spoke to United Review before the FA Cup clash with Chelsea and discussed his admiration for Ryan Giggs, his chances of playing till he's 40 and his favourite Reds goal...

On a personal note, it’s fair to say your season’s been a little frustrating. It must be easier when you play more often?
Sure. If you play a lot of games you can play yourself into form and that’s ideal. When you’re in and out, which is natural at this club, it’s more difficult. In those periods you have to treat training sessions like they are matches and work especially hard every day. Then, when you get an opportunity, hopefully your performance levels are high. This is a scenario that affects a lot of players, not just me. We have two or three players in every position and the manager rotates his side. The key is that everybody works hard and they’re ready to help the team when they are picked.

Ryan Giggs has signed another deal. How was that news received in the dressing room?
It’s good news for him, for the club and the players. He has so much experience and can give a lot to the club. He’s still amazing on the pitch so it’s very good news. It’s been amazing being at the club with him and I’ve learned a lot. He brings a lot of experience to the training pitch and onto the field and he helps a lot of the young lads. It’s nice to know he’ll be around for at least another year.

Will you still be playing at 40?
I don’t know! If I can, I hope so. Giggsy looks after himself very well and that’s important for a long career. He’s an example to everybody. To play until you’re 40 you have to take very good care of yourself. I’ll try my best to do that.

At what age did you know you wanted to be a footballer? Vince Viraj
I wanted to be a professional since the age of about nine years old, just after I started playing football. I knew then that this is what I wanted my life to be. But it was only when I was 17 or 18 and I really started to think like a man that I truly thought that I could make it happen. This was when I signed with Sporting Lisbon. I remember my first contract. I was very happy. It was a contract that included challenges in it – the more games I played for the first team, the more I got paid. It was good motivation and I had to work hard to prove I could stay in the team and prove that my team-mates could count on me on the pitch.

Do you still follow Sporting Lisbon and do you ever see them play? Tom Garner
I have Portuguese TV at home so I can watch a lot of games. I also had an opportunity when I was injured recently. I went back to Portugal for some treatment and spent two days at Sporting. I went to watch my old team play, I saw some friends and I visited the training ground. It was really enjoyable and it’s nice to remember where you come from. Everybody was happy for me and wished me luck here in Manchester.

What’s the best goal you’ve scored for Manchester United? Matty Ebbs
I think it was probably my goal against Chelsea last season, at Old Trafford. I hit the ball perfectly and the ball flew past Petr Cech into the top corner. The other one I always remember is my first goal, against Tottenham. That was really special to me.