Nani, Carrick, Owen and Hargreaves train ahead of Marseille game 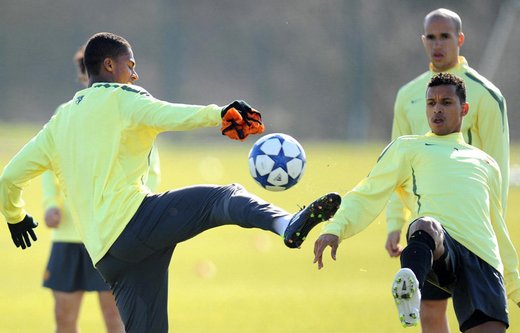 Manchester United have received a boost ahead of their UEFA Champions League tie with Marseille after several senior players returned to training.

Michael Carrick, Nani and Michael Owen were all involved in Monday morning's session ahead of the second leg against Marseille.

Nani was initially expected to be sidelined until early next month after requiring stitches in a gashed shin suffered in a challenge by Jamie Carragher in the recent defeat at Liverpool.

The Portugal winger has yet to be given the green light to return to action for Tuesday's visit of Marseille to Old Trafford, with the last-16 tie poised at 0-0.

England midfielder Carrick missed the weekend's FA Cup win over Arsenal through injury, but appears to be in contention for the game with the French champions.

Owen, meanwhile, was also involved in the training session, with the experienced striker having been sidelined since the FA Cup victory at Southampton in late January.

However, Rio Ferdinand did not feature as he continues his recovery from a calf problem and Park Ji-sung undertook some separate fitness work after a month out with a hamstring injury.

Owen Hargreaves is also back in training after returning from Germany where he has been receiving treatment in his ongoing battle for fitness.

The former Bayern Munich midfielder trained away from the main group with some of the reserves, although he is not eligible to feature in the Champions League for United.