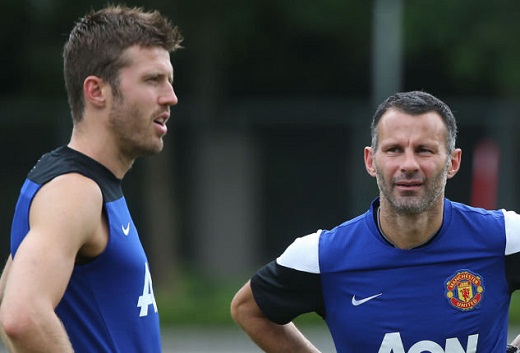 Michael Carrick insists that Ryan Giggs is a 'natural' manager after stepping up to take interim charge at Manchester United.

Giggs will take charge of his second game as United boss this weekend against Sunderland, having guided them to victory over Norwich last week.

Dutch coach Louis van Gaal seems set to be appointed as David Moyes' successor, but Carrick is full of praise for how 40-year-old Giggs has taken to the task.

"It's not an easy thing stepping up from the dressing room like that. It speaks volumes for the respect he's got that there's not been much banter, he's not taken any stick," Carrick told the Daily Telegraph.

"He's just naturally made that transition. There's such respect for him within the squad, we're trying to make it as easy as possible for him. And it's gone great so far. He's been terrific since he took over."

Carrick also admits it has been good to see the likes of Paul Scholes and Nicky Butt back around the first-team after both were brought in to assist Giggs.

"It's nice to have them back on the training pitch, to see their faces around the place," added the England midfielder. "Not just for the British lads, the foreign lads are getting so much out of their presence.

"You're talking about Giggsy and Scholesy, they're legends at this club. To have their input is incredible. They're not the most vocal, but what they do say is just gold dust.

"It's listening to the very best. Of course, they said things when they were players. But it's different now they're coaches, there's that bit more authority. To have them say some of the things they've said has been just great."

Giggs' main goal during his likely short tenure in charge of United will be to guide them to sixth, which would get the club into the Europa League, and Carrick insists that playing in Europe's second club competition would be a good thing.

"I believe actually playing twice a week can help you, if you're in a winning rhythm," he says.

"You're winning, you just want the next game to come around. Of course, you could say it's good to be able to have a full week to prepare for the next match.

"But I'm happy to play as many as I can, as long as I'm winning. It never caused a problem at this club. I'd much rather come to the end of the season being involved in everything, playing twice a week rather than worrying if I'm fatigued or not. Best thing for not making you feel tired is winning.

"I'd be happy to be in it [Europa League], it's a big competition. You've got to take the best you can get. Giggsy's come in and said he wants us to finish strong, go for it. We're not quite there yet, we've got to win the next match to keep it a possibility."