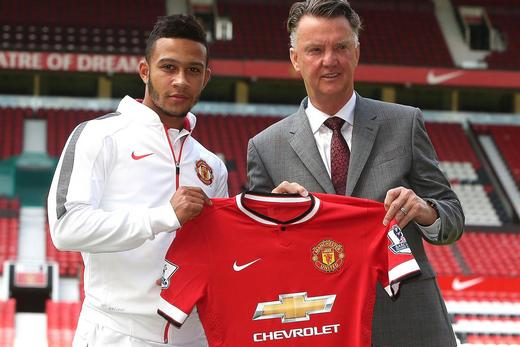 Louis van Gaal says Manchester United are still looking to buy and sell in the transfer market this summer after unveiling his first capture of 2015, Memphis Depay, as "one of the greatest talents of his age."

In signing Depay, van Gaal certainly feels United have captured one of the world’s finest young players. “He is full of confidence. You can hear that. He will notice that in the Premier League it is not so easy, compared to the Dutch league. There is always pressure on the ball and physically it is tough. He is confident but I know it is not easy. We have to give him time.”

Memphis himself cut a confident figure as he faced the world’s media at Old Trafford on Friday. He said: “I’m very excited, it’s a dream come true. I had a good season last season but it starts again and I have to prove myself in the Premier League. I’m looking forward to it. I want to win trophies with the team. It’s the biggest club in the world so we have to win trophies.

“I think [I can score goals]. I will be creative. That’s what the crowd likes. I will work on it and I am excited to do my job for United. I want to score goals and try to make assists.”

Can United win the title? It was a question the player answered with equal confidence: “Yeah, for sure. We have a lot of quality. I’m the new kid here so I have to find my way but the team has the quality to win all the trophies and to win the Premier League title.”

And what have his new teammates told him about life in the Barclays Premier League? "The other players say it’s a hard competition and that the game moves fast and everyone is strong. My teammates are going to help me settle in but I will have to do it myself as well. Everyone has been really nice. So far it's been easy."

Meanwhile, the boss also confirmed United want to sign Italian full-back Matteo Darmian from Torino. When asked about the 25-year-old, van Gaal said: “I have read that in the papers. But it is true.”

On his broader plans in the transfer market, the boss added: “Buying and selling is a process. We are in a process that lasts until 1 September. We cannot say anything about our transfer strategy because otherwise our opponents can take profit of it. Manchester United shall not buy [for the sake of buying] – I want to develop players. But sometimes you have to buy. When you buy it has to be better than what you have.” 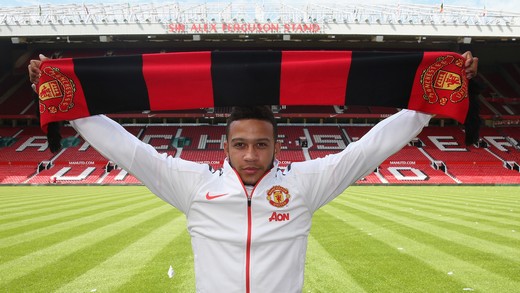 Louis van Gaal’s first signing of 2015, Memphis Depay, faced the world’s media for the first time as a Manchester United player at Old Trafford on Friday and talked about how he is settling in and his ambitions as a Red. This is what he had to say…

Memphis, it’s been a long time since you signed for United. How much are you looking forward to this season?
I’m very excited. It’s a dream come true. It’s crazy. I had a good season last season and it starts all again. I have to improve myself in the Premier League but I’m very happy to be here.

What do you hope to achieve here?
To win trophies with the team. It’s the biggest club in the world so we have to play for the trophies.

How have you found it settling in so far?
Yes. Everybody is very nice. So far it has been easy.

What have the other players said to you about the challenge?
They say it’s a hard competition – very, very hard. The game moves fast, quickly and everyone is strong. It will be different. I think my team-mates are going to settle me in but I have to also do it myself.

What has Louis van Gaal told you about your role in the team and where you might play?
I’ve been working with the trainer also at the World Cup, so I think you’ll see what he expects from me. Before, I played on the left wing. I think I’m a winger, but we will see. I want to play, of course, but it’s up to the boss where he’ll put me in the system.

You scored a lot of goals last season. Can you do the same for United?
I think so. I believe in that. I will work on it and I’m excited to do my job for Manchester United and to score goals. I have to score goals and give assists.

What do you think of the squad you’re joining? And is there potential to win the title next season?
Oh yes, for sure. We have a lot of quality. I’m the new kid here so I have to find my way but I think the team has all the qualities needed to win the title and all the trophies that are possible to win.

There have been a lot of comparisons between yourself and Cristiano Ronaldo. How do you react to that? Do you think you can be as good as him?
He is one of the best players – if not the best – in the world. I don’t want to talk too much; I want to show it on the pitch. I’m still young. I’ve not been in the game for many years – I played two seasons for PSV. I want to let my feet speak. I don’t want to compare myself with someone like that.

Do you think you can excite the fans?
Yes, I think so. I will be creative. I think that’s what the crowd like. We need goals, so…

Does anything scare you about this move?
No but I think it’s not easy. I trained three times this week and already I feel it’s different to the Dutch league, even the training. It’s like an adventure. I have to improve myself and I will work hard on it so I can show the boss that I can handle it.