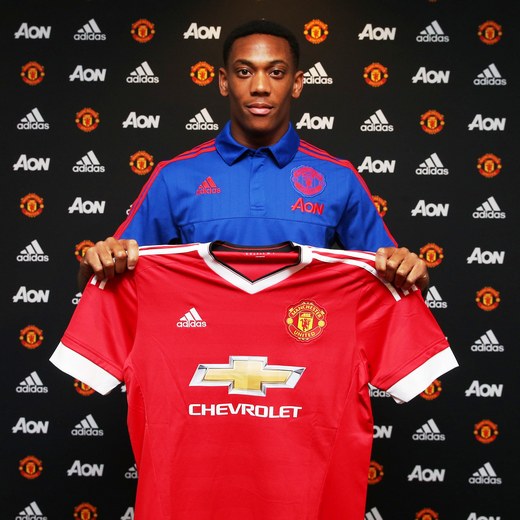 Manchester United is delighted to announce that Anthony Martial has completed his transfer from AS Monaco. Anthony joins on a four-year contract with the option to extend for a further year.

Martial, 19, has made 70 appearances for AS Monaco since joining in 2013 and has scored 15 goals. The forward has represented his country from Under-16 level right through to Under-21, and was called up to France's senior national squad for the first time on 28 August.

Anthony Martial said: "I am so excited to be joining Manchester United. I have enjoyed my time at AS Monaco and I would like to thank them and the fans for everything they have done for me.

"I have always wanted to play in the Premier League and to join the biggest club in the world is what every young footballer dreams of. I am looking forward to meeting my new team-mates and working with Louis van Gaal who has achieved so much in his career."

Louis van Gaal commented: "Anthony is a naturally talented, young, multi-functional forward with great potential. We have been watching him for a while now and he has developed immensely during his time at AS Monaco.

"I am delighted he has joined Manchester United as I believe this is the right club for him to continue his development as a young player. He has all the attributes to become a top football player; however we need to give him time to adjust to his new environment and the rhythm of the Premier League."

Anthony Martial believes he will not feel the pressure of joining Manchester United after the Frenchman sealed a transfer from Monaco on deadline day.

The highly-regarded 19-year-old is to link up with his new colleagues at Old Trafford after representing France during the international break, but has already granted MUTV his first exclusive interview.

Asked about being a young player at a club like United, Martial answered with confidence. "I don't feel the pressure. I know there is pressure but I'm ready for it.

"I spoke with the coach, Louis van Gaal, and I know that I need to work very hard. It's not easy to speak about myself but I am a very fast player. I hope that everything will go well for me at this club."

Looking forward to the prospect of playing his first-ever match at Old Trafford, the new signing concluded: "I'm very happy because the supporters are great here. I will be ready when the time comes."

The 19-year-old acquisition from AS Monaco follows Radamel Falcao in taking the famous number which previously appeared on the backs of Reds strikers Dimitar Berbatov, Louis Saha, Andy Cole and Brian McClair in the Premier League era.

Cole, who scored 121 goals in 275 games for United, tweeted "Welcome aboard @AnthonyMartial" when ManUtd.com announced the French forward's arrival on Tuesday afternoon.