Manchester United: The Player of the Year Awards 2011 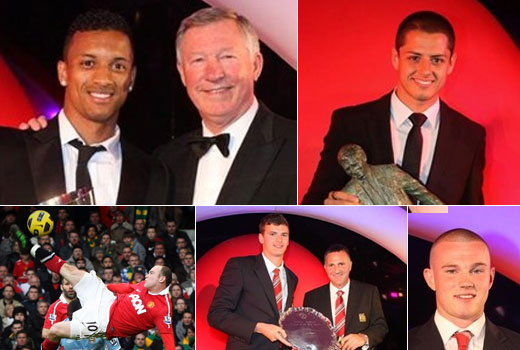 Nani has topped his outstanding season by taking home the Players’ Player of the Year prize from the official Manchester United awards night on Wednesday.

In a further nod to a remarkable campaign, the Reds' winger was voted second in the supporters' poll for the historic Sir Matt Busby Player of the Year award - just one per cent behind eventual winner Javier ‘Chicharito’ Hernandez.

These achievements cap a wonderful year for Nani, in which the Portuguese international scored 10 goals and assisted a further 18 to help United reclaim the Barclays Premier League title and reach a third Champions League final in four years.

"I must say thank you very much to my team-mates. It means a lot to win this award," declared the winger after being presented with his prize by Sir Alex. "My team-mates have helped me a lot this season. That’s why I’m stood here. I have done my best to help the team win the league and, of course, I have been very focused on working hard and improving as a player.

"This has been my most consistent season for United. Every year I’ve been here I have improved and this one was fantastic for me. I created a lot of goals and scored more than last season, so I’m very happy. I hope to do even better next season."

Wayne Rooney’s jaw-dropping overhead kick in the 2-1 win over Manchester City has been voted Goal of the Season by United fans around the world.

The gravity-defying effort, which was described by Sir Alex Ferguson as “probably the best goal scored at Old Trafford”, was the clear winner with a whopping 68% of votes.

"To score a goal like that in such a big game was a great feeling. It’s something I’ll never forget and it’ll stay with me until the day I die," beamed Wayne after collecting his prize at the club's annual awards dinner on Wednesday night. "It was just pure instinct. Nani’s cross took a little deflection so I had to adjust my body, but thankfully it went in the top corner. There’s no better feeling than scoring a goal like that in such a massive game."

Javier Hernandez has capped a phenomenal debut season for United by scooping the prestigious Sir Matt Busby Player of the Year Award.

The accolade is voted for by fans across the world on the club’s official websites and honours United’s best player in the 2010/11 campaign.

Chicharito, who has scored 20 goals this term to help the Reds win the Barclays Premier League and reach the Champions League final, was presented with the trophy at a glittering gala dinner at Old Trafford on Wednesday night. And the man himself was delighted.

"I have to say thank you so much to the fans," he said. "They have helped me a lot. I think this was a difficult decision to make and I don’t think I deserve it because it hasn’t been just one player who has played well. We are a team.

"I also must thank my family who came over to England with me and helped me a lot, and of course I’ve had great support from the boss, my team-mates, the coaches and all the staff at the club who have all helped me feel very happy and very comfortable here.

"I dreamt about playing for Manchester United and thought perhaps in my first season I’d play for the Reserves with maybe a few minutes in the first team. But thanks to the boss and all my team-mates I have played a little bit more!

"It’s an unbelievable feeling to have won the league title," he added. "I knew all about the history at Manchester United when I joined and how important it is to win every tournament you play in and thankfully we have won the Premier League."

Chicharito picked up 21% of the votes to pip Nani (20%) into second place, with skipper Nemanja Vidic (16%) completing the top three.

The Mexican becomes the sixth player to receive the award at the end of his first campaign for the Reds, following Brian McClair (the inaugural winner in 1988), Gary Pallister (1990), Ruud van Nistelrooy (2002), Cristiano Ronaldo (2004) and Gabriel Heinze (2005).

Oliver Gill has been named the Reserve Player of the Year for 2011 after a consistent season alongside Scott Wootton at the heart of the Reds' defence.

The 20-year-old beat off competition from fellow defenders Wootton and Joe Dudgeon to land the Denzil Haroun trophy after also being short-listed last season. A loan move to Bradford enabled the Surrey-born stopper to play five games last year for the Yorkshire outfit to further his experience and he also earned call-ups to United's first-team bench for the wins against Bolton and West Ham.

"I think I’ve had a good season and have progressed during the campaign like a lot of the reserves and I’m really pleased to get the award," said Oliver, after receiving his trophy from reserves boss Warren Joyce.

"It’s been great to be involved with the first team this season. You learn a lot about how the players prepare for games, hear what the manager says before games and you get to experience the big match atmosphere. I just want to keep progressing as I have done the last few years and maybe next season I'll go out on loan again and get a few appearances for the first team."

The award is the second piece of silverware for Gill this week after helping the reserves win the Manchester Senior Cup against Bolton on Monday night.

Midfield dynamo Ryan Tunnicliffe is the Jimmy Murphy Young Player of the Year for 2011.

The 18-year-old came out on top of the coaches' vote for the award after playing a key role in helping United reach the FA Youth Cup final.

"I’m in shock. I didn’t expect to win it. I’m obviously really pleased," he said after collecting his prize.

Tunnicliffe was part of the United team that drew 2-2 with Sheffield United in the first leg of the Youth Cup final on Tuesday night.

"The first leg was a good game," he said. "They put a lot of pressure on us but I think we did well. Hopefully we can get the job done on Monday in the second leg and win the trophy."

Tunnicliffe, who was handed the number 46 shirt ahead of the FA Cup tie with Crawley in February, follows the likes of Ryan Giggs, Paul Scholes, Wes Brown and Danny Welbeck in winning the award.
It's the second year running that Rooney has scooped the accolade - he won it for 2009/10 with his goal in the 3-1 win over Arsenal at the Emirates.