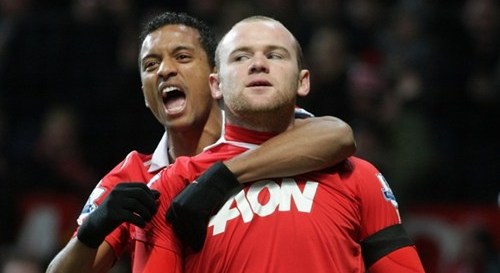 Last season’s top scorer hasn’t had much joy in front of goal this season, but Rooney netted twice before the interval to set Sir Alex’s men on the road to victory once again.

The only surprise, given recent events, was that United didn’t come from behind and neither Javier Hernandez nor Dimitar Berbatov got on the scoresheet.

In fact, despite goals in United’s last two fixtures, the Mexican striker again had to settle for a spot on the bench as Sir Alex kept faith with his first-choice (if not always firing) strike partnership.

The decision paid immediate dividends, as Rooney rattled the back of the net inside a minute with a volley from just inside the penalty area. The goal owed as much to Edwin van der Sar’s quick thinking, though, as it did to Rooney’s deft first touch and subsequent piledriver finish.

Van der Sar may be 40 and retiring at the end of the season, but his mind remains sharp. When the Reds won a free-kick 20 yards from Edwin’s goal, there appeared no danger to Aston Villa. But the Dutchman spotted Rooney loitering on the shoulder of Richard Dunne and sent a 70-yard pass over the visitors’ defence. From there, Rooney brought the ball down with feather-like touch before hammering the bouncing ball past Brad Friedel.

The goal rocked Villa and, for the next 10 minutes, it looked as though United may go further ahead. Rooney, in particular, looked well and truly in the mood, dropping deep to claim plenty of touches on the ball and, as much as he could, influence the match.

Nani had a vehement penalty appeal turned down after Dunne blocked his run inside the area before the Portuguese drew a fine save from Friedel, diving to his left, when he unleashed a rocket from the edge of the box. A save down low to his right from Ryan Giggs proved slightly easier, while Patrice Evra also tested the big American and Berbatov headed a difficult chance over the bar from close range.

United were knocking on the door and a second duly arrived in first-half stoppage time. Rooney again applied the finish – a tap-in from five yards – but, as with the opener, the pass deserved just as much recognition. This time Nani was provider, curling in a sumptuous cross from the right wing that reduced both James Collins and Friedel to spectators as Rooney nipped in behind the big centre-back to sweep home on the half-volley.

At the other end, Villa’s big-money signing Darren Bent miscued a shot on 10 minutes that rolled through tamely to van der Sar. That chance aside, Villa didn’t fashion anything of note for the first 45 minutes.

Gerard Houllier’s men were certainly a shadow of the side that played so well (for 80 minutes, at least) against the Reds back in November. On that day, Villa’s energy and enthusiasm, which stemmed largely from the youthful Marc Albrighton and Barry Bannan, caused United problem after problem. Here at Old Trafford, the Midlanders looked pedestrian at best for long periods.

Stewart Downing and Ashley Young provided the odd creative spark in the final third, but there was little sweat for United’s back four to wipe from their brows as the teams trotted down the tunnel at half-time.

Neither manager made changes at the break, although at least Villa emerged for the second period with a more positive approach. In fact, within two minutes of the restart Bent was appealing for a penalty after tangling with Evra inside the area. Ashley Young then blasted a free-kick over the bar from a promising position after John O’Shea had felled Albrighton.

Meanwhile, there was more of the same from United. Nani, Rooney and Berbatov bamboozled Villa’s defence with intricate passing exchanges, while behind them Michael Carrick adopted the sort of “quarterback” role he played to such thrilling effect in 2006/07 and 2007/08.

Villa’s increased ambition was rewarded on 58 minutes when Young sucked in three Reds before releasing Downing down the right. He surged towards goal, drew Vidic and crossed for Bent to sidefoot home, unmarked, in the centre.

Was there a comeback on the cards? Not on Nemanja Vidic’s watch.

The Reds skipper thumped home United’s third just six minutes later. Sent forward for a corner, Vidic won the initial header deep beyond the back post. The ball dropped to Rooney who, with his back to goal, took one touch before laying the ball back to the Serbian to blast through the crowded penalty area and past Friedel. It was a finish any forward would have been proud of and Old Trafford reverberated to the sound of the skipper’s name.

Ashley Young smacked a shot off the bar, Dunne denied Rooney a hat-trick with an outstanding last-ditch tackle and Nani tried his luck from distance before Berbatov wasted a glorious chance to add further gloss to the score.

It hardly mattered. United had already done more than enough to wrap up yet another victory and maintain the charge for a 19th league title.

Edwin van der Sar – Showed exactly why he’ll be missed; distribution, organisation and authority. Bent's goal apart, he barely had a shot to save all night because of his marshalling, and got United off to the perfect start with an incredible 70-yard assist inside a minute.

John O’Shea – Solid as a rock. Kept the lively Albrighton on a short leash throughout and allowed very little danger to pass down his flank. Young provided a different challenge, but Sheasy was up to the task.

Nemanja Vidic - Copy and paste the skipper’s review from any game this season. As ever, utterly imperious.

Rio Ferdinand – Everything you would expect. Cool and calm throughout, but no nonsense when the situation called for decisive action. Gave Bent almost nothing.

Patrice Evra – Magnificent. Linked up superbly with Giggs and joined several attacks. Only denied a fine goal by Friedel’s smart stop. The all-action approach also extended to his defensive work – though he was one of those caught out in the build-up to Bent’s goal.

Michael Carrick – Despite a mid-match change of midfield partner, Carrick was the understated hub of United’s game. Decisive with possession and effective defensively, he operated well in a withdrawn role.

Darren Fletcher -  A busy, buzzing outing from the Scot, but it was curtailed after just over half an hour due to an eye injury.

Ryan Giggs – Does he ever get bored of being brilliant? A continuation of his excellent recent form, Ryan’s vision and functionality crippled Villa.

Dimitar Berbatov – For once, an Old Trafford outing without goals – though he had his chances. Not to detract from his overall performance, however, which was once again excellent.

Wayne Rooney – Playing on instinct again, the striker’s pair of finishes smacked of last season’s all-conquering Rooney. Quieter after the break, but still only denied a hat-trick by a superb save from Friedel.

SUBSTITUTES
Anderson (on for Fletcher, 34 mins) – The Brazilian barely touched the ball in the final stages of the first half, but stamped his authority on the second period and was involved in much of United’s best attacking play.
Nani – Such a thorn in Villa’s side. Ciaran Clark had a tough evening against the winger, who put in a perfect cross for Rooney’s second on the stroke of half-time.