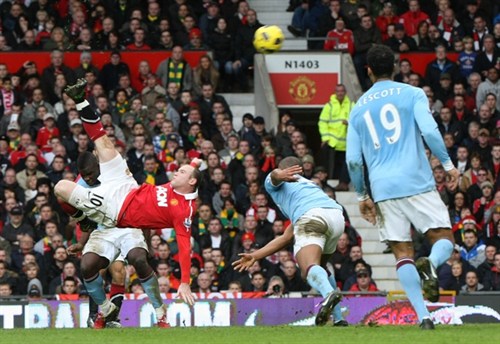 United fans have seen more than most. And for those inside Old Trafford on Saturday, they can now add to the list one of the most spectacular goals ever scored in a Manchester derby.

Michael Owen’s winner in this fixture last season was dramatic, but Wayne Rooney’s overhead kick on 78 minutes was so outrageous, so perfect, that it almost beggared belief. He seemed to hang in the air for an age. And then, when the ball arrived above his head, his body horizontal, Rooney’s right boot sent it hurtling into the top corner.

So much for a boring Manchester derby, eh? In fact, any fears that this game would be a repeat of the drab 0-0 that the teams played out at Eastlands in November disappeared almost immediately as United won a corner within the first minute. And although Sir Alex had loaded his midfield to match City's 4-5-1 formation, Nani and Ryan Giggs consistently pushed onto City’s full-backs when the Reds were in possession.

City, too, played their part in the entertainment. In fact, despite a reputation for being overtly defensive against the big sides, it was Mancini’s men who fashioned the best chances in the opening minutes. With barely three minutes on the clock, Tevez and Silva combined to play the Spaniard in on goal, but his stabbed effort rolled mercifully wide of the far post.

The chances kept coming. Nani jinked inside from the right wing and fizzed a left-footed shot just over the bar, while Yaya Toure headed wide from David Silva’s free-kick. Smalling then had to be alert to cut out Toure’s drilled cross after the Ivorian had found space inside the penalty area.

City weren’t sitting back and the visitors’ attacking approach appeared to catch the Reds off-guard. It was definitely uncharacteristic. Already this season, City had ground out goalless draws away from home against Tottenham and Arsenal. Here, though, the Blues showed plenty of ambition, with Zabaleta and Micah Richards flying down the flanks and Toure and Silva quick to join Tevez in attack.

In contrast, United rather probed and prodded in City’s half and the final ball was all too often misplaced or under-hit. The response from the Stretford End after 30 minutes was to cheer for Dimitar Berbatov’s introduction. Patience, like form, often goes out the window on derby day.

Darren Fletcher, the two-goal hero few remember from last season’s league game at Old Trafford, tried his best to get on the scoresheet when he met Giggs’ outswinging cross firmly from 15 yards. His effort, like Nani’s blast a minute later, was straight at Joe Hart, though, and the City goalkeeper fielded the ball easily.

Patrice Evra then survived a half-hearted claim for handball before Nani sent the Reds ahead with four minutes of the first half remaining. Edwin van der Sar’s long clearance fell to Giggs and the Welshman, spotting Nani’s run through the middle, found him with a cushioned first-time pass. Nani’s first touch took him into the penalty area, his second closer to Hart, but it was his third – a cool left-footed finish that rolled the ball past the City goalkeeper – that prompted an explosion of noise all around Old Trafford.

The Portuguese has scored plenty of goals this term, but few have been greeted with such delirium by United fans. His derby opener handed the Reds the advantage and meant that, for the 10th consecutive home game, Sir Alex’s men went into the break in front.
Manchester City responded by sending Shaun Wright-Phillips on for Aleksander Kolarov early in the second period.

Like in the first half, the visitors began brightly and a Silva effort – this time on target – drew a sharp intake of breath around the ground. Van der Sar claimed the shot easily but the ease with which the former Valencia forward made space for himself on the edge of the penalty area would have worried United’s coaching staff.

The change the Stretford End had clamoured for after half an hour came to fruition on 67 minutes, but not before City had levelled in fortuitous circumstances. Substitute Edin Dzeko’s shot was heading into a crowd of players when it cannoned off Silva’s back and deflected past van der Sar and into the United goal. It was harsh on Sir Alex’s men, who hadn’t been seriously threatened since the game’s opening minutes.

With City hungry for possession, the Bulgarian’s introduction (on for Anderson) gave the Reds an added outlet up front. But his presence – nor anybody else’s – had much to do with the Reds’ second goal. That was all down to Wayne Rooney’s prodigious talent and athleticism.

When Nani’s right-wing cross clipped Zabaleta and looped high into the penalty area, there appeared to be little immediate danger. But Rooney twisted and launched himself into the air before connecting with an acrobatic overhead kick that screamed into the top corner.

Before the game, in his programme notes, Sir Alex had branded City “a force to be reckoned with”. They may well be, but United, thanks to Rooney’s undoubted genius, still remain top dogs in Manchester.

Edwin van der Sar
City may have created a few decent chances but poor finishing rather than Edwin’s brilliance kept them at bay. A quiet day for the Dutchman.

John O’Shea
Defended well and blocked plenty of crosses, especially when up against Zabaleta in the first half. Edin Dzeko posed a different challenge later, but he coped just as admirably.

Chris Smalling
Rio might not get his place back if Smalling keeps turning in performances like this. In his first derby, Chris was rock solid – cool, calm and collected.

Nemanja Vidic
The big Serbian put his body on the line more than once and frustrated City’s forward with a string of timely tackles and interceptions.

Patrice Evra
Had his hands full early on as Micah Richards surged forward from right back but was never exposed or found wanting. Survived a penalty shout for handball.

Nani
Always looked to make something happen. Fizzed a few shots goalwards before sending United in front and then crossed for Rooney’s winner. Another top performance.

Anderson
Not a poor display, although the Brazilian only really took the game to City in the way Sir Alex would have liked for a brief period in the first half. To his credit, though, he did put himself about.

Paul Scholes
A cool head in a crowded midfield, Scholes kept possession well and kept the ball moving. Shifted the ball wide to Nani in the build-up to United’s winner.

Darren Fletcher
Headed powerfully on target in the first half but otherwise his contribution came via his work-rate and tackling. Played his part in limiting City’s forays through the middle.

Ryan Giggs
Gave the ball away cheaply early on but soon settled and caused City problems on his flank. Provided a perfect pass for Nani’s goal.

Wayne Rooney
By his own admission, Wayne didn’t have his greatest game. He did score his greatest ever goal, though. And that’s all that counts.

SUBSTITUTES
Dimitar Berbatov (for Anderson, 67)
Rooney’s winner aside, City had the better of the last 20 minutes, meaning Berbatov was often on the periphery.