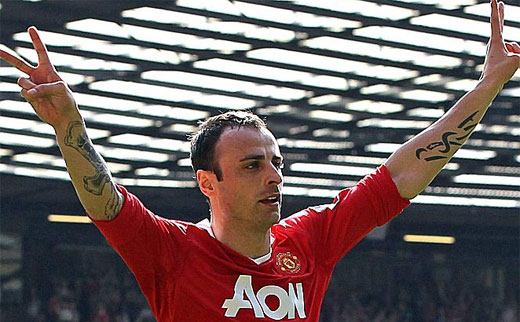 United may not have always played like champions on Saturday, but the Reds took another step towards a record 19th league title with a comfortable 2-0 win over Fulham at Old Trafford.

Of course, each step at this stage of the season must feel like a giant stride to those teams trailing Sir Alex's men. Matches are running out for the chasing pack to haul in a United side determined to land a historic piece of silverware. the At the final whistle, United (with only six games to play) were 10 points clear of Arsenal, 11 clear of Chelsea and 13 ahead of neighbours Manchester City.

On an Old Trafford pitch bathed in sunshine, the Reds outclassed Fulham and, but for a nervy opening 10 minutes, rarely looked troubled. Even the visitors seemed to take their foot off the gas in the second half and for long periods it felt more like a training game than a competitive fixture. It was as if Fulham, who came into the match having won just once in their 18 previous trips to M16, never seriously believed they'd buck the trend.

That said, the Cottagers did start brightly. Gael Kakuta, on loan from Chelsea, stretched Tomasz Kuszczak within 45 seconds. Moussa Dembele then did the same with barely six minutes on the clock, while Bobby Zamora blasted wide after finding space inside the area.

Around them, there were rare starts for Tomasz Kuszczak and Darron Gibson, while Paul Scholes returned from suspension and John O'Shea and Anderson from injury.

Chris Smalling, in action for the first time against his former club since his move to Old Trafford last summer, looked every inch a distinguished defender.  He tackled fearlessly, passed assuredly and won the majority of his aerial duels in both penalty areas.

Of course, there was no Wayne Rooney for Manchester United as the striker served the first of his two-game domestic suspension after being charged by the Football Association for using “offensive, abusive and/or insulting language” in the Reds' 4-2 win over West Ham last weekend.

In Rooney's absence, Dimitar Berbatov led the line in what was only his third start in United's last 12 fixtures.  And it was the Bulgarian who shook the Reds out of their early slumber, firing United into the lead on 12 minutes.

Nani must be credited for much of its invention, the Portuguese jinking past a number of would-be Fulham tacklers and playing a neat one-two with Anderson before laying the ball off to Berbatov on his left to finish with a cool side-footted shot into the far corner.

Fulham's early bluster disappeared completely. For the rest of the half, the home side was comfortable in possession and carved out regular chances. Anderson wasted the best of those the Reds failed to convert, screwing his shot wide on 19 minutes, while Valencia and Nani caused havoc on the flanks.

Those two combined just after 30 minutes to double United's lead. Nani reached a long ball ahead of Schwarzer, rounded the Australian goalkeeper and homed in on goal. Fulham's Aaron Hughes did enough to divert Nani's shot sufficiently away from goal, but it spun straight to Antonio Valencia, who nodded in at the far post from close range.

Anderson and Gibson drew saves from Schwarzer at the start of the second half, while Fulham substitute Eidur Gudjohnsen curled an effort just past the post that had the visiting fans celebrating as if he'd scored. It took them a good 10 seconds to realise the ball had actually passed the wrong side of the post.

Zamora then went close with a free-kick on 72 minutes, but it was a rare moment of genuine tension in a 45 minutes that will be forgotten as quickly as it began. United, too, were sluggish, doing just enough to hold onto the lead. It was understandable, though: the game was won, the points in the bag. Why waste energy?

O'Shea hit the target from distance and substitute Michael Owen wriggled into the penalty area late on, but in the end the Reds' first-half exertions were enough to earn three points.

Players, fans, even Sir Alex Ferguson, enjoyed a brief moment of celebration at the final whistle. After all, with just six games to play and a 10-point lead, the Reds' title chances look good.

But almost as quickly as the roar went up it subsided and thoughts turned immediately to Chelsea's visit on Tuesday night. That should provide a sterner test.

Tomasz Kuszczak
Tested by a couple of early efforts (and saved spectacularly from a long-range effort in the second half, despite the award of a goal-kick) but a largely untroubled clean sheet for the Pole. Survived only one scare when getting into a tangle with Chris Smalling.

John O'Shea
Slotted in comfortably at right-back and was unflustered throughout. Clearly his height was an asset when defending set-pieces and he even got forward to have a late shot saved by Mark Schwarzer.

Nemanja Vidic
Solid as a rock in defence and always in control. The captain attacked the ball with his customary aggression and managed to keep Bobby Zamora quiet.

Chris Smalling
Was never going to let anybody down again against his former club and this was another polished performance. Produced a couple of excellent slide tackles and his distribution was impressive.

Patrice Evra
Looked sharp and combined superbly with Nani down the left flank. Determined in defence and lively when trying to join in the attack. He's a class act when in this form.

Antonio Valencia
His second goal of the season and another display of pace and purpose. Stretched the Fulham defence with his direct running and his seamless return has been a real boost for Sir Alex.

Darron Gibson
Played some quality passes from midfield but was unable to shoot with his usual venom when presented with a couple of openings from the edge of the box. Shifted to the right flank for a short while before Fabio's introduction but looked more at home in the middle.

Paul Scholes
A largely flawless performance from the veteran who surely shouldn't be thinking about retiring when he can still dictate games like this. Conceded possession very rarely, passed with precision and asserted his authority from the start. Just a shame his late shot cleared the bar in front of the Stretford End.

Anderson
A vibrant return to first-team action and a few defence-splitting passes stick in the mind. Earned a break towards the end but it's just a shame he couldn't display the finishing prowess he is clearly capable of (after scoring twice for the Reserves on Thursday).

Nani
Quite how the Portuguese winger was overlooked by his fellow professionals for the PFA Player of the Year award is anybody's guess. A slalom through the Cottagers' defence allowed Dimitar Berbatov to bag the opener and the chief creator nipped past Schwarzer to help tee up the second for Valencia.

Dimitar Berbatov
Yet another opening goal at Old Trafford for the league's top scorer, despatched clinically past Schwarzer. Some of his control and skills take the breath away and, particularly in the first half, he kept the visting defence on its toes. Always looks a class act.

Michael Owen
One burst down the left into the box showed he's lost none of his zip and he worked hard to get up to the pace of the game. Couldn't get a near-post header on target late on but he'll be pleased to have some more minutes under his belt.

Fabio
Was asked to provide a much-neeeded injection of energy when the second half started to fall flat and bombed down both flanks with plenty of vigour.

Michael Carrick
Carried on from where he left off at Stamford Bridge with an assured display of passing. Instantly into the groove when coming on for the closing stages and seemed in confident mood.