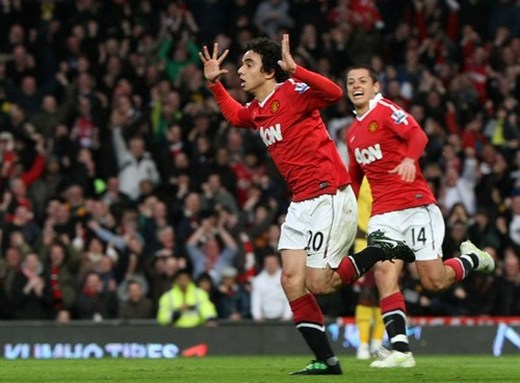 United are heading to Wembley for the FA Cup semi-final after powering past title rivals Arsenal with a goal in each half from Fabio and Wayne Rooney plus a virtuoso goalkeeping performance by Edwin van der Sar.

The Dutchman's dream of winning the globally-famous competition for the first time, in his final season, is now very much on and deservedly so after his string of saves - some of them world-class - denied a Gunners team desperate not to flunk a third trophy quest in a fortnight.

Sir Alex Ferguson rang the changes for this heavyweight contest, some of them forced, following last Sunday's disappointing league display at Anfield. His response to the expected absence of Nani was an intriguing one, as he opted to field the Da Silva twins on the left and right flanks. Nemanja Vidic returned at the heart of the defence after suspension; Irish pair Darron Gibson and John O'Shea were drafted into central midfield with Michael Carrick and Paul Scholes rested altogether, possibly with Marseille on Tuesday in mind. Meanwhile Antonio Valencia was named in the 18 for the first time since breaking a leg last September.

Looking far from leggy after their Champions League chasing in Barcelona, the Gunners took the game to United in the early stages with Andrey Arshavin fashioning the first attempt on target from the left flank and Nasri knitting things together neatly on the right. The Reds seemed the more sluggish side and were relieved when Edwin van der Sar’s off-beam bowl-out led to Arshavin striking wide of the left-hand post.

Fans’ excitement at seeing the Da Silvas in attacking positions was heightened in the 15th minute when Fabio whipped in a terrific ball from the left and Rafael, running in behind Hernandez, just failed to keep his powerful header under the crossbar.

United were penned back for large periods in the first half-hour with Wayne Rooney operating more as a third central midfielder than a foil for the often-isolated Hernandez at the spearhead. But for all Arsenal’s possession, they found penetration much harder to come by than Liverpool did six days ago. And after Diaby and van Persie both had long-range shots comfortably saved, the Gunners were given a lesson in final-third play when the Reds took the lead against the run of play.

Rooney, fed by Rafael, floated a cross out to the left and when Hernandez’s inspired diving header drew a reflex parry from Almunia, Fabio beat Kosicelny to the loose ball and crashed it first time into the gaping net.

Fabio’s goal – his second in senior football – changed the scoreboard but not the pattern of play as Arsenal continued to dominate possession before the break. Van Persie came close to levelling the scores for half-time with a drive that van der Sar guided wide with his fingertips, and Nasri was also thwarted when the veteran keeper spotted his low shot just in time to stop it going inside the left-hand post. United were otherwise comfortable and seemingly content to let Arsenal play in front of Brown, Smalling, Vidic and Evra.

Sir Alex decided to up the ante – Antonio Valencia coming on as a substitute, for goal scorer Fabio, at the start of the second period. The Ecuadorian’s return to action was warmly greeted by the home fans, who would soon be given another reason to roar.

A breathtaking start to the second half almost produced an equaliser for Arsenal, moments before Rooney increased United’s lead. Van der Sar proved his invaluable worth once, sorry, twice again when centre-back Kosicelny of all people had two bites at the cherry after linking up with van Persie. The first shot, deflected off Brown, was kept out by van der Sar’s legs – the second, on the rebound, was clawed away with incredible athleticism by the 40 year-old Dutchman.

The pulsating open play swung from a double save, to a doubling of United’s lead. Rafael created it with a stirring run into the box and after Johan Djourou beat Hernandez to his low ball and direct it skywards, Rooney was perfectly placed to nod across Almunia and make it 2-0 to the Reds just three minutes into the second half.

Home and hosed? Hardly. Van der Sar’s next save was just around the corner, this time patting down Nasri’s venomous strike when the Frenchman ran menacingly onto Brown’s unsuccessful clearance. Arsenal’s first substitute, Marouane Chamakh, also tested Edwin from the edge of the box, but van Persie’s curling effort towards the top left-hand corner didn’t quite bend enough to require the keeper’s intervention.

Ryan Giggs – Arsenal’s FA Cup semi-final nemesis in 1999 – rolled back the twelve years or more to improve United as an attacking force after replacing Rafael. He seemed poised to make it 3-0 from Smalling’s far-post leap and knock-down, but before the Welshman could strike, Wilshere – a boy not even born when Giggs made his Reds debut 20 years ago – stole in to spare his team further pain.

That was a rare and fleeting victory for youth – otherwise the old dogs were having their day as van der Sar made possibly his best save to beat away the bounce from Chamakh’s downward header, and then stopped Rosicky’s rasping strike. If imitation is the sincerest of form of flattery, then Almunia paid tribute to United’s number one with a great stop of his own – the Spaniard acrobatically preventing an own goal when Rooney’s low ball towards Hernandez was diverted goalwards by Djourou .

Djourou was hurt in the incident and a long break in play ensued before he was stretchered off to applause from all four sides of the ground. This left Arsenal with ten men for the closing moments but they suffered no further damage not even in the eight minutes of injury time - majestic United had already done enough to win a fantastic cup tie.

Edwin van der Sar – A double save to deny Koscielny, and a close-range parry to keep out Chamakh’s header were the highlights of an outstanding display

Wes Brown – Understandably looked a bit rusty at right-back, having not played there since November; endured a difficult shift at right-back against Arshavin and co

Chris Smalling – Had the measure of Arsenal after tough times against Chelsea and Liverpool; almost teed up Giggs at the other end with a salmon-esque leap

Nemanja Vidic – Showed what we were missing at Anfield with a commanding captain’s performance, peppered with blocks, headers and vital interceptions

Patrice Evra – Coped well with his countryman Nasri during a busy first half; had more respite and opportunity to go forward in the second period before being subbed

Rafael – Relished 64 minutes on the right wing; helped to create the first goal for Fabio after almost converting his brother’s cross with a header just over the bar

Darron Gibson – The only natural midfielder in United’s eleven had to play a more conservative game than normal, in the face of plentiful Arsenal possession

John O’Shea – Helped Gibson to break up Arsenal’s attacks, rattling into tackles as you’d expect of a defender playing in the engine room

Fabio – Broke the deadlock, against the run of play, with his second senior goal for the club; unfortunate only to play the first 45 minutes

Wayne Rooney – Industrious and adaptable; played as a third central midfielder and later as a left winger, and poached his ninth goal of the season with a deft header

Javier Hernandez – The Mexican’s movement caused all sorts of problems for Koscielny and Djourou; his diving header, saved by Almunia, led to Fabio’s goal

Antonio Valencia (on for Fabio, 45) – Impressive first match since being seriously injured last September; helped the Reds to attack more in the second half

Ryan Giggs (on for Rafael, 64) – Made his 46th appearance against Arsenal and almost marked it with a goal in a lively last half-hour

Paul Scholes (on for Evra, 80) – Showed both sides of his game in a ten-minute cameo, from some wonderful flighted passes to a booking for a rash challenge