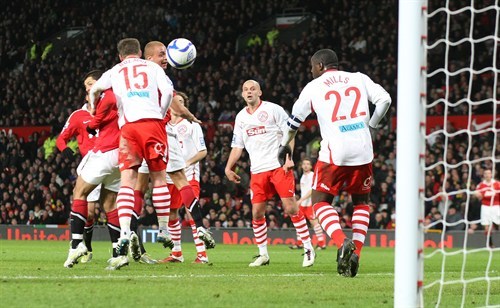 There may be 93 league places between the two teams, but there was no gulf in the scoreline as a much-changed United had to graft to book a place in the FA Cup quarter-finals courtesy of a rare Wes Brown goal in the first-half.

It is unfair to patronise Crawley Town and describe them as plucky, but they deserve credit for coming to Old Trafford with a positive attitude, trying to play football and, most of all, making it a testing day for Sir Alex Ferguson’s men, with a few late scares thrown in for good measure. Their 9,000 travelling fans may not make the long journey home on the wave of euphoria that victory would have provided, but they return with plenty of pride at their team’s performance.

For United, this tie was sandwiched between a vital Manchester derby league match and the resumption of the Champions League knockout stages with a first-leg tie away to Marseille on Wednesday. It was about doing a job to get through to the next round whilst offering playing time to those in greatest need of it. In that sense, it was a case of job done. There was a scoring, solid display from captain Brown, while Darron Gibson and John O’Shea can take positives from their performances.

United made nine changes to the team that beat City in such dramatic circumstances at Old Trafford seven days previously. Match-winner Wayne Rooney was named on the bench as an insurance policy, but when selecting his substitutes Sir Alex will have hoped to be in a position to use three teenagers: 19-year-old striker Joshua King, and midfielders Ryan Tunnicliffe (18) and Paul Pogba (17). He was not afforded that luxury, but the experience will serve them well.

As expected, it was a high-tempo, positive start from the Sussex club, backed by their exciteable fans. They were clearly confident and, on this stage, having beaten three league sides – Swindon, Derby and Torquay – en route to Old Trafford, why shouldn’t they be? United possessed enoughg experience and quality to win the tie comfortably, but the FA Cup can be neglectful to hierarchy.

The first opening for United came after good work from Gabriel Obertan, having briefly switched to the right flank. The Frenchman flashed a low ball across the six-yard box but unfortunately nobody gambled on reaching it. After 11 minutes, Crawley midfielder Ben Smith had the visitors’ first opportunity with a speculative shot on the bounce which, although going wide, had Anders Lindegaard momentarily worried.

The Reds gradually began to take a grip of the game, and on 28 minutes United’s no.28 Darron Gibson had the vision to create the goal. First, his 40-yard through-ball played Javier Hernandez in, but the Mexican was tackled before getting his shot off. From the resulting corner, Gibson’s second attempt at a cross was met with a glancing header from Wes Brown that nestled inside the far post. It’s his first goal since October 2008, and only the fourth of his Reds career. It could have been 2-0 five minutes later when Carrick’s scything pass set Fabio bearing down on goal, but the Brazilian’s outside-of-the-boot shot went wide.

Shortly after that Obertan cut inside from the left and drilled in a shot that Michael Kuipers palmed away.

The second half started with the introduction of Rooney in place of Anderson, and before the hour mark Chris Smalling came on for Rafael, with John O’Shea shifting to right-back. With 20 minutes remaining Darren Fletcher was called upon when Fabio suffered an injury. It meant none of the hopeful teenagers would get on but the game was too tight for that. Besides, there was work still to do and United had been limited to two timid efforts - one from Rooney which went over and another curling effort from Fabio which Kuipers comfortably saved.

Despite an increased number of older, more experienced players on the pitch, United's performance became possibly more fractured. And when David Hunt volleyed wide from 12 yards for the visitors with little more than 15 minutes remaining, the visiting supporters sensed an upset. It nearly arrived when Matt Tubbs sent an overhead kick narrowly over the bar. United were being made to work for the victory, as they should, and that the Reds spent the closing stages seeing the tie out rather than going for a second tells it's own story. In fact, Crawley almost snatched a draw when substitute Richard Brodie hit the bar with a looping header in stoppage time. So, it's a place the last eight for United, but Crawley deserve all the plaudits.

Anders Lindegaard He had very little to do, despite Crawley’s late chances. His distribution was good, always looking to release the ball quickly.

Rafael He got stuck in and he seems to relish these hustle and bustle cup ties. But he was eventually substituted.

John O’Shea Steady and solid, exactly what Sir Alex will have wanted him to be and he played in three of the back four positions due to injuries.

Wes Brown Rock solid in defence and got the game’s only goal. He was United’s best player by a considerable distance.

Fabio Good chance to score early on, but his shot went wide. He defended well, but it’s just a shame that injuries always seem to hamper his progress.

Darron Gibson His passing was excellent at times. There were two outstanding through-balls in the first-half and his cross led to Wes Brown’s goal.

Michael Carrick He was never likely to pull out fancy tricks or flicks just because United are facing non-league opposition. Quietly went about his business.

Anderson He was drawn into the physical midfield battle rather than exerting his quality on the game. Substituted at half-time with an injury.

Bebe The Portuguese winger struggled to get into the game. On a more positive note he put in some decent first-half crosses.

Javier Hernandez He was alert and lively, but he was too often isolated up front on his own. His frustration got the better of him when he jumped the gun and got caught offside on a few occasions.

Gabriel Obertan He is a definite danger and his quality is undoubted. There’s a a comparison to be drawn with Nani of a couple of seasons ago. Just needs consistency.

Wayne Rooney (on for Anderson 46) It was a strange game for him to come into, but he never really exerted his authority on the match.

Chris Smalling (on for Rafael 53) A confident performance. He shored things up at the back and looked like a real class act.

Darren Fletcher (on for Fabio 69) Slotted in at right-back when Fabio was forced off. His was a job of containment as Crawley went on a late charge.