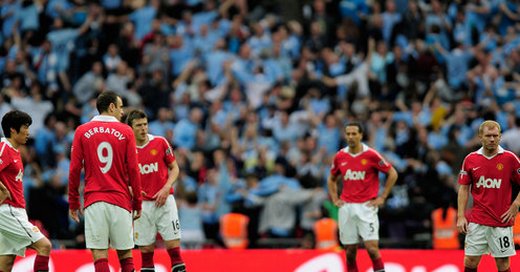 One down, two to go.

After Saturday's 1-0 defeat to Manchester City, the FA Cup is out of reach. But Manchester United remain in pole position to win a record 19th league title and face German side Schalke over two legs for a place in the European Cup final. Life could be worse.

Of course, on Saturday at Wembley that was scant consolation for the 40-odd-thousand Reds who travelled to London to watch only the second ever Manchester derby to be played outside of the city. Unfortunately, it went the same way as the first. On that occasion, back in 1926, City won an FA Cup semi-final 3-0 at Bramall Lane. This time there was only one goal in it but the result was just as devastating.

After an evenly contested first period, a lapse in concentration at the beginning of the second was pounced on and United punished dearly. The task was then made even more difficult when Paul Scholes was sent off on 72 minutes for a studs-up challenge on Pablo Zabaleta that left the Argentinian with two nasty cuts on his right thigh.

When the Reds' FA Cup dream came to an end at the semi-final stage in 2009 at least there was the “weakened team” argument to play. On Saturday, there were no such excuses. Despite Tuesday's looming trip to St James' Park, United fielded a full-strength side at Wembley. This was a derby, after all. And, for that matter, an FA Cup semi-final.

Sir Alex named his strongest available back five. There was also room in the starting XI for three traditional wingers, although Ji-sung Park played tucked in centrally alongside Michael Carrick and Paul Scholes, with Nani and Antonio Valencia on the flanks.

Up front, Dimitar Berbatov got the nod ahead of Javier Hernandez – Wayne Rooney, remember, was serving the second of a two-game ban – and the Bulgarian was left to rue two spurned chances in the space of 30 seconds with the game just 15 minutes old.

Neat one-touch football from Carrick, Scholes and Park on the edge of City's penalty area released Berbatov, but the striker saw his shot saved superbly by the onrushing Joe Hart. Then, from the resulting quickly-taken throw-in, Nani advanced into the penalty area, passed low across the six-yard box and Berbatov, no more than three yards out and with an open goal at his mercy, stretched to meet the ball but sliced his effort over the bar.

City, meanwhile, struggled to assert themselves early on and didn't seriously threaten Edwin van der Sar's goal until the 31 st minute. Even then, Gareth Barry's shot missed its mark, although Blues fans at the opposite end of the stadium were convinced it had found the net.

Perhaps Manchester City's unfamiliarity with life on the big stage played its part in their sluggish start. After all, this was their first visit to the new Wembley.  But while United dominated the opening half-hour, the game remained goalless. To their credit, City had defended well and even enjoyed their own spell of sustained pressure before the interval.

Balotelli forced van der Sar into a smart save when he unleashed a swerving effort from 35 yards before Joleon Lescott volleyed over when he was left unattended at the back post. Yaya Toure then strode forward and earned City a corner, which was taken quickly and worked to Vincent Kompany, whose curling shot from 20 yards breezed just past van der Sar's left-hand upright. The half-time whistle almost came as a relief.

The break did little to curb City's momentum and the Blues took the lead seven minutes after the restart following sloppy United defending. First, van der Sar fluffed a clearance, which fell to Silva 35 yards from goal. O'Shea won back possession well and fed the ball square to Carrick, who aimed to shift the ball again to Scholes. But Toure read his intentions, intercepted the pass and strode confidently into the area. His pace took him past Vidic before he kept his cool to roll his shot through van der Sar's legs and into the net. Advantage City.

Sir Alex's men barely had a kick for the next 10 minutes as the Blues, eyeing a first FA Cup final since 1981, peppered van der Sar's goal in search of a second. It didn't come, though, and United inched back into the game when Hart pushed Nani's deflected free-kick onto the bar and Javier Hernandez entered the fray.

Scholes' dismissal then effectively ended the game, although there was still time for Carrick to shoot on target, Hernandez to have an effort blocked and Park to head tamely at Hart. But this wasn't United's day. Even the five minutes of injury time failed to yield a presentable chance.

So, City move on to the FA Cup final after a disappointing day out in the capital. Still, at least there are other opportunites for silverware this season.

Edwin van der Sar
It was his sloppy clearance that eventually led to the goal but he was in top form to cuff over a long-range shot from Mario Balotelli. Alert to prevent Balotelli reaching a Yaya Toure pass early on and scrambled an Adam Johnson cross behind. Kept out a stumbling Toure late on.

John O'Shea
It looked like he had retrieved the situation before the goal and was generally sound. Was unable to get forward too often but defended with his usual reliance and competence.

Rio Ferdinand
Made one vital tackle on Toure soon after the goal and was as accomplished as ever, despite the early morning call to leave the hotel due to the birth of his daughter. Tried to drive the team forward near the end but was involved in a flare-up with Balotelli after the final whistle.

Nemanja Vidic
Unable to get to Toure for the goal but later made a decent challenge to thwart the Ivorian as he powered forward. Headed wide from an Antonio Valencia corner in the first half and made another decent interception to deny Balotelli. Imposing in the air.

Patrice Evra
A quiet display by his standards but produced two good tackles when the Reds were rocking after conceding the goal. Dragged shots wide and into the side-netting after purposeful runs forward but his attacking instincts were curbed by the presence of Johnson and Shaun Wright-Phillips.

Michael Carrick
Clearly at fault for the winner as his pass was cut out by Toure on the edge of his own box. It was a real blemish on an otherwise assured passing display on the whole and he was involved in the move that freed Dimitar Berbatov early on. Hit a curling shot at Joe Hart as United searched in vain for an equaliser.

Paul Scholes
Sent off on 72 minutes for a high challenge on Pablo Zabaleta to leave the Reds up against it. It was at odds with his cool performance in terms of pinging passes around but it was a rush of blood for the veteran.

Ji-sung Park
An incisive pass led to Berbatov's first chance and he buzzed around with typical zest. Not involved as much as he would have liked in the first half but kept working hard to try and make something happen.

Nani
Took a kick in the face from Nigel de Jong in the first half before teeing up Berbatov for a chance the Bulgarian should have gobbled up. Always a threat, he smashed an ambitious volley wide and came closest to a leveller when his free-kick was tipped onto the bar by Joe Hart.

Antonio Valencia
Not at his most influential before being withdrawn on 65 minutes. Provided width and plenty of intelligence while also tracking back unselfishly for the most part but maybe found Wembley's big pitch difficult after so long out through injury.

Dimitar Berbatov
Guilty of spurning two chances early on - the first forced a fine save out of Hart but the other really should have been buried from close range. Nodded over a Valencia corner but could have used more support in his lone role.

Substitutes:
Javier Hernandez (for Valencia 65m)
Unlucky when United were reduced to 10 men which made his job all the more difficult. Was unable to get the one chance which could have made the difference but had one attempt blocked after a neat turn.

Anderson (for Berbatov 74m)
Drove the 10 men forward from midfield with some surging runs and provided some much-needed energy. Also tracked back with his colleagues tiring but made one wayward header when United looked to keep the pressure on in the dying seconds.

Fabio da Silva (for O'Shea 84m)
Popped up on the right flank to try and add a bit of threat after replacing O'Shea late on but was caught offside to kill off one promising move.