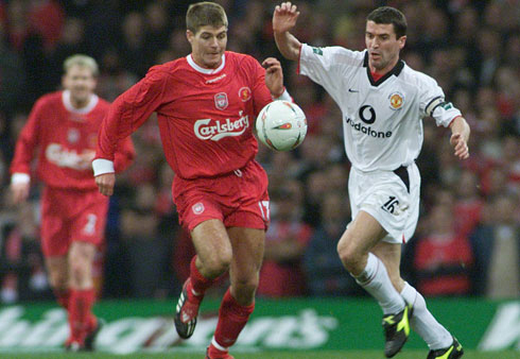 Manchester United players dominate the Fantasy Teams as voted for by both the public and experts as part of the Premier League's 20 Seasons Awards.

The public Fantasy Team of the 20 Seasons features six players who made their name at Old Trafford, while the panel team consists of seven current or former Manchester United players.

The goalkeeper position proved to be straightforward with Peter Schmeichel taking a whopping 57% of the public vote, but his former Manchester United team-mate Gary Neville outdid him in the right-back category, polling 58%.

There was also a clear winner at left-back with Chelsea’s Ashley Cole taking 40% of the vote.

The competition for centre-back was tight; Arsenal’s title-winning captain Tony Adamsgetting 19% and current Manchester United captain Nemanja Vidic receiving 18% of the vote. The Serbian international was just 1% ahead of Chelsea's John Terry.

There were two foregone conclusions in midfield. Receiving the biggest percentage for any position was Manchester United veteran Ryan Giggs, who got a massive 62% of the public vote for left midfield.

On the other flank is his former Old Trafford colleague Cristiano Ronaldo, who got 55% of the vote for right midfield.

In central midfield Paul Scholes helped to make it a Manchester United hat-trick, receiving a 26% share.

The other central midfield position in the public vote went to Liverpool captain Steven Gerrard, who edged out Roy Keane 19% to 16%.

The public and panel both agreed on forwards as Thierry Henry and Alan Shearer were first-choice strikers, respectively taking 30% and 18%.

It was a close run for the second forward, with Shearer just edging out Eric Cantona's 17% of the vote.

In terms of numbers of votes cast, Henry was second only to Giggs, with the Welshman polling 4,293 votes more.

The Premier League 20 Seasons Awards has seen 300,000 fans casting over 4.4m votes in five categories: Goal, Match, Save, Goal Celebration and Fantasy Team of the 20 Seasons.

The remaining awards will be revealed at a made-for-media event on Tuesday 15 May, when the Player and Manager of the 20 Seasons Awards will be announced.