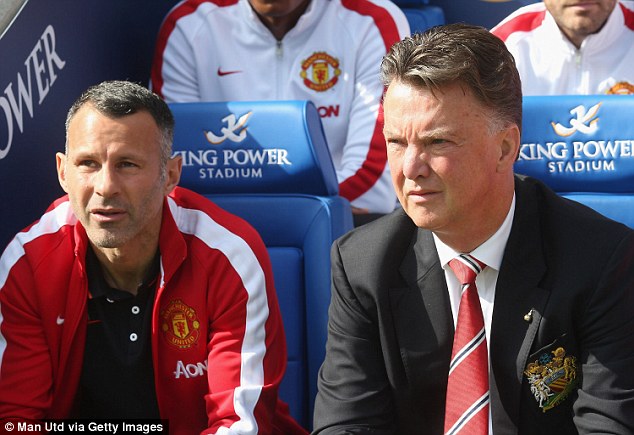 Louis van Gaal has been pictured for the first time with his predecessor Sir Alex Ferguson - at an event where the Dutchman revealed he is grooming Ryan Giggs to eventually replace him as Manchester United manager.

The 63-year-old praised Giggs as the perfect example for the players and also underlined his excellent communication skills.

Giggs, who is British football's most decorated player after a glittering career at Manchester United, is now the club´s assistant manager and was the guest of honour at an annual charity dinner at Old Trafford.

Van Gaal and Giggs were joined by a host of famous faces on Thursday night, as the Dutch manager rubbed shoulders with United greats including Ferguson, Denis Law and Bryan Robson in the stadium's Manchester Suite.

The evening is understood to have ended with a charismatic speech by Van Gaal, in which he was gushing with praise for his assistant.

A source told Sportsmail: 'Ít was an extremely confident speech and the fans present were lifted by his words. He spoke positively about Giggs, who he described as having all the capabilities to be the clubs next manager and said he is "learning all the time".'

Giggs, who assumed the managerial reins for the final four games of last season when David Moyes was sacked by United, is understood to have been keen on taking the job full-time but was eventually overlooked in favour of Van Gaal.

The Dutchman agreed to retain Giggs as a key figure on his coaching team and the duo have struck up a positive relationship, despite a traumatic start to the season that has seen United win just one Premier League match from five and exit the Capital One Cup at the hands of League One MK Dons.