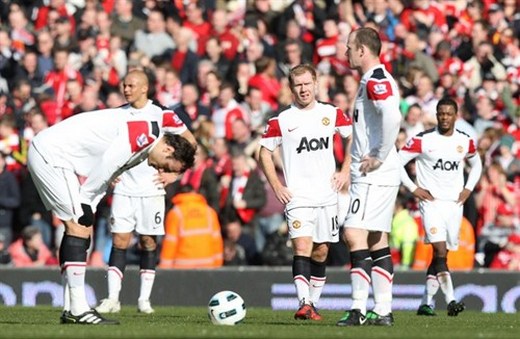 The Dutch striker converted a quickfire pair of close-range chances, firstly hoofing home from the goalline after impressive skill from Luis Suarez, then nodding in following Nani's errant attempt to head away a cross.

United’s Portuguese winger was then carried off amid ugly scenes at the end of the first period, following a shocking high challenge from Jamie Carragher. The veteran defender was only booked, however, and was quickly followed by Edwin van der Sar, Rafael and Martin Skrtel into referee Phil Dowd’s notebook.

Although United rallied in the second half, Kuyt completed his hat-trick when he tapped home another close-range finish, this time after van der Sar had spilled Suarez’s free-kick. The Reds' only tangible reward came in injury-time, when Chicharito clinically nodded home Ryan Giggs' right-wing cross.

With Rio Ferdinand and Nemanja Vidic absent through injury and suspension respectively, Wes Brown returned to the starting line-up alongside Chris Smalling. Rafael also came in at the expense of John O'Shea, while Patrice Evra recovered from injury to take his spot on the left flank.

For the hosts, Steven Gerrard played despite pre-match suggestions that he would be ruled out by a groin injury. Club record signing Andy Carroll, meanwhile, was named on the bench for the first time since his January arrival from Newcastle.

Liverpool made the brighter start to the game, and only poor control from Suarez prevented him from making the most of Raul Meireles’ drilled cross. Instead the ball bobbled through to van der Sar.

Though the hosts’ hassling and harrying allowed United little time to settle, Berbatov almost struck a spectacular opening goal just after the quarter-hour mark, clipping the outside of Pepe Reina’s post with an audacious swerving volley.

United slowly began to grow in stature, and again came close to taking the lead when Brown’s deflected header was cleared off the line by Meireles. Instead, Liverpool forged ahead after superb trickery from Suarez, who turned away from Smalling and Rafael, bypassed challenges from Carrick and Brown and squared for Kuyt to smash in a finish from the goalline.

Tails up, Liverpool soon pressed home their advantage. Van der Sar dashed from his line to make a superb sprawling save from Maxi Rodriguez, before Nani mis-judged Suarez’s deep cross and headed back towards his own goal. Kuyt, deep inside the six-yard box, was more accurate with his own header and doubled the hosts’ lead.

Nani’s afternoon soon lunged from bad to worse, as Carragher planted his studs high into the winger’s shin. As tempers flared on both sides, Nani leapt to his feet to show Dowd his wound, then collapsed in agony before being stretchered from the field, to be replaced by Chicharito. Carragher was booked, as was van der Sar for dissent. Soon afterwards, Rafael and Skrtel entered the book for a set-to after a strong challenge from the United defender.

Half-time soothed tempers on both sides, but United started the second period with greater intent. Chicharito steered Berbatov’s cross narrowly off target, before Giggs did likewise from Rooney’s centre. Berbatov then argued that he had reduced the arrears, but the officials correctly ruled that the Bulgarian’s header had been blocked on the line by Meireles.

United’s cause was lost when Kuyt completed his close-range treble shortly after the hour. Suarez’s free-kick bounced just in front of van der Sar, who couldn’t clutch the ball, and his fellow Dutchman raced in to sweep home a finish and emulate Berbatov’s September hat-trick at Old Trafford.

Thereafter, United sought a route back into the match, but merely in vain. Carrick’s cross narrowly evaded Chicharito, then the midfielder's shot was deflected marginally wide of Reina's post, but the game had long since passed the Reds by. The goal, when it came, was too late. Injury-time had already begun when Chicharito rose to clinically nod home Giggs' cross, hence the strike merely illustrated the little Mexican's predatory instincts, rather than heralding a dramatic fightback.

The defeat, and the nature of it, is a substantial setback for United. But a three-point advantage over second-placed Arsenal, who have a game in hand, still constitutes a lead. United are masters of their own destiny, but must quickly get back on track.

Edwin van der Sar – Made a couple of very smart saves and had no chance with the first two goals, but was unable to clutch Suarez’s free-kick in the build-up to Kuyt’s third.

Rafael – The Brazilian rarely found chance to bomb forward as he loves, and picked up a booking for a hefty first-half lunge on Lucas – although Rodriguez somehow escaped censure for a high tackle on Rafael in the build-up.

Wes Brown – Made a solid start to the game, and had a header cleared off the line at the Kop, but he and Smalling were often under siege.

Chris Smalling – Made a great early block to stop Kuyt, but was thereafter subjected to his toughest afternoon as a United player. All part of the learning curve.

Patrice Evra – Like many of his colleagues, started brightly before lulling, but looked like one of the Reds’ most menacing attacking outlets.

Nani – A nightmare afternoon for the Portuguese. Struggled to impose himself on the game, inadvertently teed up Kuyt’s second goal and was then injured by Carragher’s high lunge.

Michael Carrick – Started the game in confident mood, but soon he and Scholes were struggling to cope with Liverpool’s packed, fluid midfield. Almost pulled a late goal back.

Paul Scholes – Neat and tidy in possession, but struggled to track the movement of Meireles. Booked late on and subsequently replaced by Darren Fletcher

Ryan Giggs – The veteran winger will want to instantly forget the day he became United’s record league appearance-maker. A solid enough display and an assist for Chicharito’s header.

Dimitar Berbatov – Showed some wonderful touches and struck the outside of Reina’s post with United’s best effort, but was increasingly isolated. Drifted in and out of the game.

Wayne Rooney – Kept very quiet in an attacking sense, and wasn’t helped by having to deputise on the left wing when Nani was stretchered off.

Chicharito (on for Nani, 45) – Plugged away manfully during his 45-minute stint, and gave Liverpool’s defenders plenty to deal with before his late consolation goal.

John O’Shea (on for Rafael, 76) – Quickly got involved and slung a few crosses into the Liverpool area, but the hosts continued to defend stoutly.

Darren Fletcher (on for Scholes, 83) – Had no time to impact on the match, with Liverpool already three goals clear.