Lindegaard: Giggs can be a new Guardiola 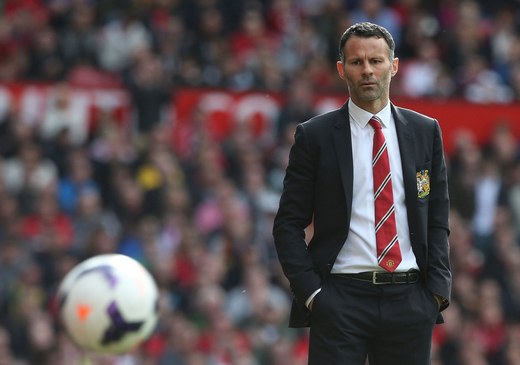 Following the sacking of David Moyes last week, Giggs was handed temporary charge for United's remaining four games, in the first of which he oversaw a 4-0 home win against Norwich at Old Trafford.

United are still believed to be looking to bring in Louis van Gaal, according to reports, though the manner of the victory and the attacking performance on Saturday has led to calls for Giggs to be handed the role on a permanent basis.

Giggs clearly has the support of the dressing room, with Wayne Rooney saying he has "all the credentials" while Juan Mata called him a "proper Manchester United boy" after both men scored twice against Norwich.

Now second-choice goalkeeper Lindegaard has added his voice to the clamour. He said in his column with Betfair.com.dk: "Ryan Giggs has always held a kind of professional distance to his team-mates. He opened his mouth, when it was relevant, and people have always listened.

"What we have seen in the first week has been more than convincing and the parallels with Sir Alex Ferguson are striking.

"It is clear that Ryan Giggs has been learning from history's most awe-inspiring football manager.

"His last speech before the team went on the pitch before the match against Norwich was spine-tingling in a way that I have only experienced from Sir Alex.

"Some might question whether it can work to go from being a team-mate to the manager from one day to the next.

"Normally, I have my reservations, but in Giggs' case, it is another matter."

Guardiola took over at Barcelona in 2008 at the age of 37, three years younger than Giggs, having also coached the club's second team for a season.

He went on to guide Barcelona to three La Liga titles and won the Champions League twice, beating United in the final both times, in what is considered the most successful period in the club's history.

Guardiola stepped down in 2012 and joined Bayern Munich last summer, where he has already secured the Bundesliga title in record time.

While he admits comparisons between the pair might be premature, Lindegaard insists he already sees the same qualities of Guardiola in Giggs.

"It probably sounds rather naive and impetuous and I understand people's scepticism about any conclusion drawn from the results of four workouts, a game and a day off, but to me we are dealing with a new Guardiola," Lindegaard said.

"The question is whether he [Giggs] is already ready to meet the enormous potential he possesses.

"Fortunately, it's not my decision to make, but whatever the club decides, I'm sure that everyone on and around the team will respect it."

Lindegaard also admitted United's dismal season has been "frustrating", in a campaign that has seen them slump to seventh place and fail to qualify for the Champions League for the first time since 1995-96.

"But the reality is, in my eyes simple - the results have not been sufficient, and it has affected the team.

"For me, the story is no more than that. David Moyes is a good man and whatever one may think of him, he deserves the same kind of respect now as eight months ago."