Lille admit that they are prepared to sell Eden Hazard 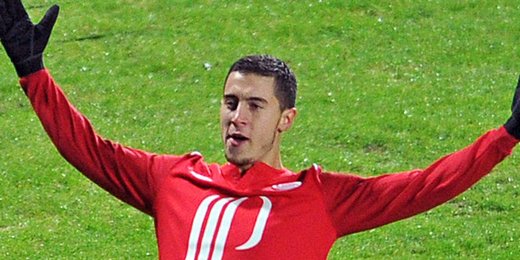 Premiership rivals Manchester United, Chelsea and Arsenal are all interested in the talented Belgium and Lille midfielder Eden Hazard, according to reports from France. Arsene Wenger has been an admirer of Hazard for many years, and Chelsea made a bid to take him to Stamford Bridge in January.

Now it seems that the Man Utd boss Alex Ferguson sees Hazard as the perfect replacement for Ryan Giggs when he retires this summer, and is also preparing to join in the bidding.

The 19-year-old Belgian is in great demand, and Lille have announced they are only prepared to sell their prized asset at a reasonable price.

Lille manager Rudi Garcia told French journalists: “At the end of the season if someone is interested in making a bid we will study it and if not, nothing happens”.

Hazard is a two time winner of the Ligue 1 Young Player of the Year award, formerly won by such players as Samir Nasri, Thierry Henry and Zinedine Zidane. He is the only non-French player to win it and the only player to win it two years in a row.

Eden Hazard is already valued at £21 million but Arsenal, Chelsea and Manchester United may have to dig deeper if a bidding war starts for a player that is being compared to Cristiano Ronaldo and Lionel Messi.