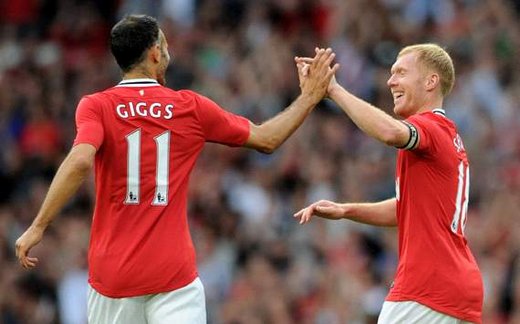 Former Manchester United forward Eric Cantona has marvelled at how long both Ryan Giggs and Paul Scholes have played for the club.

Cantona played alongside both midfielders during his five-year stay at Old Trafford before retiring at the relatively young age of 31, but insisted that he did not maintain the passion for the game, as the homegrown pair have.

The former striker also labelled the league and FA Cup double won by United in 1994, when Scholes and Giggs were fresh-faced youngsters, as the greatest achievement of his career.

"Ryan Giggs and Paul Scholes are different to me," Cantona told ESPN.

"When I was 20 I gave interviews and said if I lose the passion, the fire, I will stop and try to do something else.

"But those that still play and still have the fire, it’s good. I would have loved to have this fire forever and try to play forever. But I lost it and retired.

"The best moment was when we won the first double with young players.

"It was great, it’s great to win things with new players. The players were in a first season for the club and they were so great.

"When an older player encourages you, tries to give you confidence, it is very important – you can destroy ­somebody or give them wings, big wings.

"So what I learnt I tried to give to young players. I just tried, I’m not the kind of player who speaks a lot, but I know we all have different opportunities to give something."

The arrival of Netherlands international Robin van Persie at Old Trafford has seen Wayne Rooney occupy a deeper, more creative position behind him, similar to the one Cantona made his own during his time at the club.

The 46-year-old believes that Rooney has had to earn the right to play in the role, crediting Sir Alex Ferguson with creating it especially for him.

Cantona added: "It is not the kind of thing you ask for. You have to earn it, but you need someone to drive you.

"I’m very proud of playing that role, it’s great. Alex Ferguson gave me freedom on the pitch, but I needed time. He created this role in what he had seen in me, in the player I was and personality I had.

"It also depends on the tactics of the team, and what he expects from players."