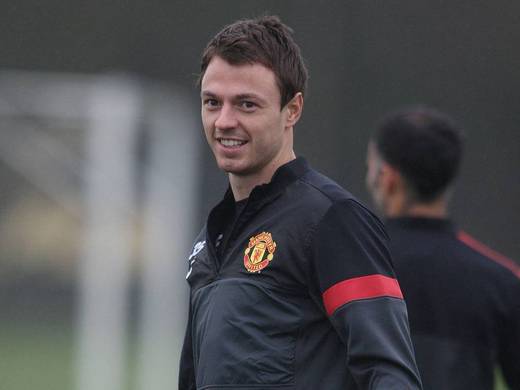 The Northern Ireland defender has now equalled John Terry and Frank Lampard for number of championships won, which underlines what a winning machine Manchester United became under Sir Alex Ferguson.

It means the examples Evans has to follow mainly come from within the Old Trafford dressing room.And, in that regard, the 25-year-old feels he comes up well short.

"It is my third Premier League medal but it is insignificant compared to what some of the other lads have achieved," Evans told MUTV.

"There are guys in there on five and six. Ryan has 13.

"That is the driving force here.

"People say I have won three. But I want to be up there with the best of them and I am sure there are a lot more in the squad who feel like that."

The attitude of those senior figures will be vital in this summer's transition from the Ferguson era to that of David Moyes.

For United need to maintain the same drive and determination even though they are no longer hearing the same voice that has cajoled so many inspired performances out of them and, since Cristiano Ronaldo's exit in 2009, been the major difference between the Red Devils and the rest.

"I have been a Manchester United fan all my life and I have never known another manager at the club," said Evans.

"I got emotional when Gary Neville left the club so you can imagine what it is like now."

Paul Scholes' retirement leaves Giggs as the last of that famed 'Class of 92', after which Rio Ferdinand, Michael Carrick, Patrice Evra and Nemanja Vidic become the elder statesmen.

Evans is amongst those next in line and seemed to have made a significant breakthrough earlier in the season when Ferguson confirmed he was now a first-choice given Ferdinand and Vidic need to be managed through a season.

Clearly, Moyes may have different ideas to his predecessor, which means all the hard work must start again for Evans.

He is quite pleased with his contribution this season though, even if a couple of small injuries have halted his progress at the end.

"I have been happy with the way my season has gone," he said.

" I have picked up one or two little injuries, which I would have liked to have avoided, but I am happy with the games I have played.

"I always wish I could have played more but winning another Premier League is a big bonus and not something to be sniffed at, whilst there are other competitions I would like to get my hands on."