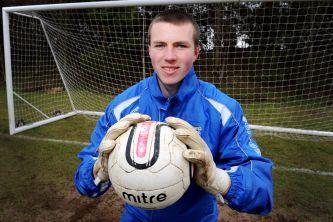 ENGLAND and Manchester City goalkeeper Joe Hart was a helpless spectator as Wayne Rooney's wonder goal settled the Manchester derby on Saturday – and one Grimsby Town goalkeeper knows exactly how he felt.

Eighteen-year-old Mariners Youth keeper Rob Peet spent the day, 48 hours earlier, in the firing line from the England and Manchester United hot-shot during his four-day trial with the Red Devils.

He admits he had as little joy as Hart in keeping Rooney pile-drivers out, though he did have more success against United record-appearance holder Ryan Giggs.

Peet saved a spot-kick from the man who hit United's winning penalty in the 2008 Champions' League final to round off his stint with the Premier League leaders and says it's a moment he'll remember for some time.

Peet said: "We did some shooting with Rooney, Berbatov, Giggs and Carrick.

"It was such a good experience to see how they work and see the tempo they play at.

"Facing a Wayne Rooney shot was tough; I won't lie.

"He hits the ball so hard.

"There were times when he didn't even get any back-lift and the ball flew at you.

"Obviously the balls are a lot lighter but even so I've never seen anyone hit shots as hard.

"Then the first-team players practised their penalties just before they finished off and I managed to save one from Ryan Giggs.

"I expected it to fly in the corner so it was a nice way for me to finish my time there off.

"He didn't look best pleased, though."

The experience came on the final day of Peet's trial with the Red Devils; a day that also saw him put through his paces with United number one Edwin Van der Sar and fellow first-teamers Tomasz Kuszczak and Anders Lindegaard.

And he says the chance to see some of the world's best players close-up in training was something he'll never forget.

Peet added: "Seeing what top players do and how they work day in, day out just gives you a brief taste of what it takes to play at the very top.

"They work so hard.

"Everybody thinks that because they are top players they don't do much but they do.

"They are far from lazy.

"Most of them do extra sessions after training on their own.

"They certainly earn their money.

"The way Van der Sar does things is incredibly professional.

"Just to watch him taught me so much; the hours he puts in to be the very best.