Giggs: We can go all the way in Europe now 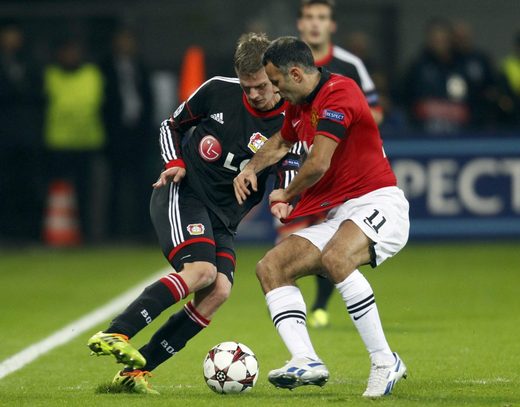 Ryan Giggs believes he can play in the Champions League final at the age of 40 this season.

The Manchester United icon played a leading role in his team’s 5-0 dismantling of Bayer Leverkusen.

Giggs believes David Moyes’s team are good enough to go all the way to the final this time round. He said: ‘If we play like we did in Germany we can get there. We’ve seen the speed and the quality we had up front.

‘And we were missing  quality players in Robin van Persie, Nemanja Vidic and Michael Carrick. It’s a  competition in which you have got to perform  otherwise you won’t get anywhere in it. But if we put on performances like this, we can go a long way.’

Giggs’s appearances have been rationed by Moyes this season but the United manager hinted after Wednesday’s win that the Welshman may be able to go on for another season.

Giggs has lost none of his enthusiasm even if he is already tired of talk of his 40th birthday today.

‘I don’t think about it if I’m honest until guys like you remind me,’ he said.

‘I’m just enjoying playing and it helps when you have legs around you. You’ve got Phil Jones in midfield and the front four were brilliant in Germany, a real handful. So that helps.

‘So yeah, I’m enjoying it but I tend to enjoy it more in December and January when all the games come thick and fast and I can get into a rhythm. You’ve got to work hard during the week, put in the performances in training and hopefully you get picked.

‘You do still get the buzz. Winning 5-0 away against a team second in the Bundesliga, you’ve got to get a buzz.’

Asked if his team-mates may have a special reception in store for him at training  this morning, Giggs was cautious. ‘I’m not coming  in on Friday,’ he smiled. ‘I’m going to stay in bed just in case.’

United’s players remain in awe of Giggs’s longevity and it appears that respect now extends to the opposition.

‘Ryan was fantastic. He has done it for years and  I’ve run out of things to  say about him.’

Defender Rio Ferdinand added: ‘I don’t know how Giggsy does it. I am going to have to see what he is  eating and copy everything he is doing. He is 40 and it is ridiculous to be playing at this level.’