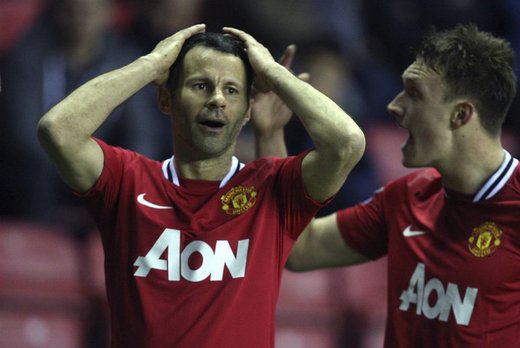 Ryan Giggs has called on United to bounce back from the disappointing 1-0 defeat at Wigan.

The midfielder felt the Reds were denied a clear penalty when Maynor Figueroa handled a Phil Jones cross in the box but had few complaints about the scoreline after a below-par display. The onus is on the league leaders to start building another crucial unbeaten run, starting with the weekend clash against Aston Villa.

"We didn't perform," he told MUTV at the DW Stadium. "For a start, our normal passing game wasn't as fluent and we kept giving the ball away. Obviously, you've got to give credit to Wigan - they put us under a lot of pressure, especially early on and credit to them as well.

"They worked hard but that's something we come up against quite a bit [being closed down] so it's not an excuse not to be able to handle that. We just didn't keep the ball like Manchester United usually do. I think we only had one or two shots on goal and that's also disappointing so we have to look at the game and work on it and get ready for Sunday."

There were a couple of controversial moments in the game, most notably Victor Moses' disallowed header after Gary Caldwell obstructed David De Gea and the lack of a penalty award to the visitors in the second half.

"I didn't see it but I think, from the corner before it, I heard the referee [Phil Dowd] say to stay away from David and "don't get in his way". I don't know if that's what it was disallowed for, putting David off, but obviously I'm pleased to see it ruled out.

"I had a great view [for the Figueroa incident] and it was obviously a blatant handball. I asked the linesman and he said he didn't see it. You get some and sometimes you don't. If these things equal themselves out, I think we're probably owed one as we've had a couple go against us, like Newcastle and today, but you make your own luck."

Giggs is under no illusions that the Reds will need to show the mettle of champions to finish the job and clinch what would be a 13th title medal for the Old Trafford legend.

"We've got to not get too down at what's happened," said the veteran. "It's happened quite a bit this season, there's been an odd sort of display where we've just not performed but the main thing is we've recovered from it and that's what we've got to do.

"It it is important [to beat Villa and Everton in the upcoming home fixtures]. We're at Old Trafford and at home and we'll be looking to win both games and put the pressure on. But, like I say, throughout the season, we've had poor performances and poor results but we've always bounced back."