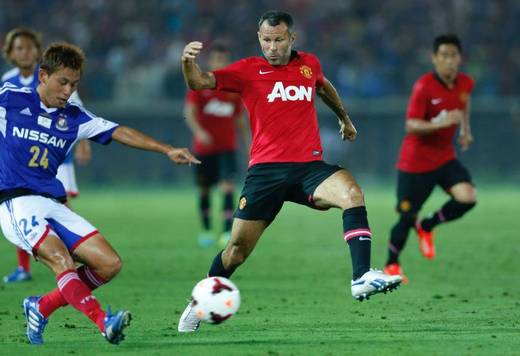 YOKOHAMA – Manchester United winger Ryan Giggs insists there is no need to panic at the club’s lukewarm start under new manager David Moyes, and believes teammate Shinji Kagawa has what it takes to make a big impression over the coming season.

United lost 3-2 to Yokohama F. Marinos in an exhibition match at Nissan Stadium on Tuesday night to leave the Premier League champions with two defeats from three games on their current preseason tour of Asia, denying Moyes the smooth transition he would have liked after taking over from Alex Ferguson three weeks ago.

Question marks hang over United ahead of the new Premier League campaign given the seismic shift in power after more than 26 years under Ferguson’s command, but the evergreen Giggs is unconcerned as long as the team is up to speed in time for its Aug. 17 opener away to Swansea City.

“You want to win every game, but the main thing about preseason training is getting your fitness,” said the 39-year-old, who has been handed a player-coach role under Moyes. “There were a lot of players tonight starting for the first time or getting 90 minutes for the first time or coming on, so it’s a process about building toward that first game against Swansea.

“You’d like to win every game, but I would take losing every preseason game as long as we win in the Premier League. You’ve got to give credit to the other team. Yokohama played well tonight. Of course there’s stuff that we can work on, and we will do. But the season is about three or four weeks from starting and gradually we are getting better and fitter, and hopefully we will start winning games.”

Marinos took the lead through Marquinhos after only 27 seconds before falling behind to a Jesse Lingard strike and a Masakazu Tashiro own goal, but the J. League side equalized in the 50th minute through Fabio before substitute Yoshihito Fujita stole the show with an 88th-minute winner in front of 65,372 fans.

“They’re a good team,” Giggs said of Marinos, who are currently third in the J. League table at the halfway point of the season. “Of course they’re in the middle of their season and it’s a test, and it’s a good test because you don’t want to go through preseason winning every game 6-0 or 7-0. You need to be tested because we’re going to be tested in three or four weeks in the Premier League.

“Like I say, we can work on things, do things better, keep the ball, defend better, but it’s always good to play against quality opposition.”

Kagawa came on as a 62nd-minute substitute to make his first appearance under Moyes having joined the squad only a day earlier, and Giggs believes his Japanese teammate has the quality to thrive after a mixed first season at Old Trafford.

“For the first season Shinji did well,” said Giggs. “He’s obviously a quality player, but Manchester United is not just about one player. It’s about a squad and that’s why we’re so successful. But Shinji is a big part of that because he has qualities that other players don’t have.

“He’s technically very good, he can play in different positions — in the pocket, just behind the midfield — and he scores goals with either foot, so he’s an important player for Manchester United.”

Moyes is also looking forward to seeing what Kagawa can offer as he familiarizes himself with his new squad, but the former Everton manager is keeping an open mind when it comes to deciding the 24-year-old’s best position.

“It was the first time I’ve had the chance to see Shinji playing,” said Moyes. “He had a great chance to score but the keeper made a save, and Ashley Young had the chance to maybe roll him in for a goal as well. I think if he had got one of them then the man-of-the-match award might have been truly justified, but overall I was pleased to get him back. It’s the first time I’ve worked with him.

“Sir Alex told me a lot about Shinji and about what he is good at, and he can play in this position, he can play maybe wider if I need him also, so we’ll see where he’s best suited. But once we get him back and work with him we’ll try to decide what’s best.”

Marinos fully deserved their victory after taking the game to the three-time European champions straight from the kickoff, and Marquinhos believes the Kanagawa side can use the result to boost its J. League title challenge.

“This will give the young players on our team a lot of confidence, but even at my age it’s a great pleasure to score a goal against a team with so many international-class players,” said the 37-year-old Brazilian. “This is a goal that will stay with me for the rest of my life. I once scored a goal against Real Madrid, and this gives me the same kind of confidence.”