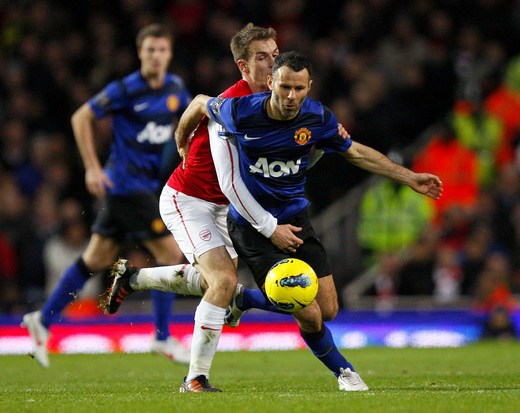 The capital has traditionally been a tricky location for the Reds but in 2011/12 Sir Alex’s men picked up 13 of a possible 15 points on the road and beat all five clubs – Tottenham, Arsenal, Chelsea, Fulham, Queens Park Rangers – at Old Trafford.

It all bodes well for next season when there’ll be a sixth London side to contend with following West Ham’s promotion via the play-offs.

“Our form in London – we won nearly every game there apart from Chelsea – was very pleasing.”
- Ryan Giggs

One of those home wins – the 8-2 victory against Arsenal – will remain in Ryan's memory for a long time.

“As a team performance you’ve got to look at the Arsenal game when you’re talking about highlights,” Giggs told ManUtd.com.

“To score eight goals against a team that has been one of our biggest rivals for so many years is something special.

“Our form in London – I think we won nearly every game there apart from Chelsea – was very pleasing.”

Despite only picking up a point at Stamford Bridge, Giggs has fond memories of a match that produced a stirring comeback. The Reds were three goals down after 50 minutes, but a Wayne Rooney brace and then a late Javier Hernandez equaliser - created by Ryan himself - sealed a dramatic draw.

“Again, that was against one of our rivals from the last few years, and at Stamford Bridge where we haven’t had a good record over the last 10 years," Giggs reflected.

“We came back and we kept the belief, and we were probably unlucky not to win it in the end. There were so many great performances like that during the season.”