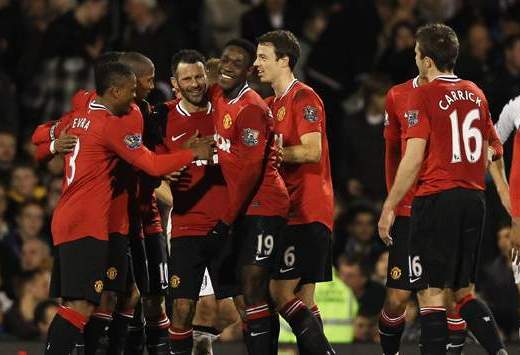 At Craven Cottage on Wednesday night Ryan Giggs scored a goal. It was the third Manchester United strike in a five-goal rout, so in normal circumstances it would have been of no note.

Except it was the veteran winger's first league goal this season. And it meant that, as Gary Lineker was swift to point out on Match of the Day, Giggs had found the net in every single season of the Premier League's existence. Twenty years he has been striking - which is some achievement.

What a shame that his goal did not coincide — as, but for the intervention of Villa's Marc Albrighton elsewhere on the night, it almost did - with the 20,000th goal scored in the Premier League. What a thing that would have been. In his 20th year, scoring the 20,000th goal: you can't buy that kind of romance.

Except, though nobody seemed to note it at the time, the 20th year was not the really important thing to be recorded about his goal. Giggs's effort marked an even more extraordinary landmark: it was the 22nd consecutive league campaign in which he has found the mark. Because the truth is, he actually scored a few in the old Football League Division One.

I know: incredible, isn't it? Yes, there actually was football before the Premier League. And Ryan Giggs was scoring in it.

Such has been the Premier League's iron grip on our thinking, however, that it is easy to forget there was a fully functioning operation long before Richard Scudamore, Sky TV and Barclays even became involved.
Sure, it was a long time ago — so long ago Leeds won the last non-Prem title — but that does not mean all records began when the top clubs broke away from the rest of the Football League. Whisper it, but there was a game out there before pro-zone, before hi-performance base layers. Astonishing as it may seem, there was something happening even before players wore gloves with short sleeved shirts.

Yet we in the media have been so blinded by the commercial leviathan we appear to have concertinaed everything into the timespan of the Premier League. All our statistical and historical thinking has been geared towards the Premier League era, as if that was when football started. Sky, the chief cheerleaders of the brand, have understandable excuse: their own history neatly parallels the Premier League's. But the rest of us have no excuse for buying into this ever-growing idea of a Stalinist new dawn.

Let's remind ourselves of a couple of things: Alan Shearer may indeed be the leading goalscorer in Premier League history, but he is only fifth in the all-time records, behind Jimmy Greaves, Dixie Dean, Steve Bloomer and Gordon Hodgson. Liverpool may not have won the Premier League, but they have the small matter of 18 championships to their name accrued before the breakaway.

Perhaps 20,000 goals have been scored in the Premier League, but more than six times that number were recorded in the top flight even before the Year Zero, or 1993 as it is sometimes referred to. Oh, and should Manchester City win the title this season, yes, it will be the first time players in the sky blue shirt have lifted the trophy, but it will not be the club's first ever victory in the league. It will be their third.

History matters. It places the present in proper context. You only have to remember the risible manner in which the Milton Keynes Dons claimed to have been FA Cup winners to appreciate that altering past facts is the province of the scoundrel through the ages. We have a proud, extensive and significant football history in this country.

The truth is, noble as they may have appeared, Giggs and Albrighton's records this week were wholly artificial, invented for promotional purposes. Our leagues have been in operation for more than 140 years. Wilfully to shoehorn all that into a mere two decades solely to satisfy the commercial imperatives of those currently holding sway over the game is to diminish all that came before.