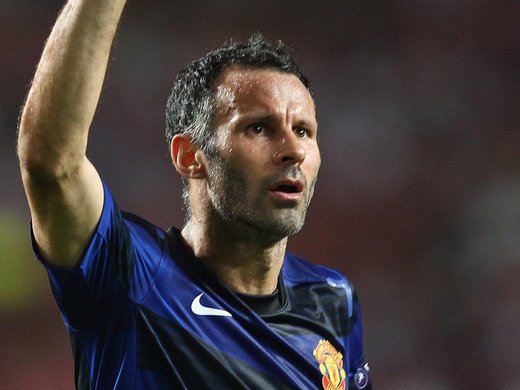 Ryan Giggs still has no plans to retire, even though the man in the opposing dug-out at Old Trafford on Sunday will be much younger than his 37 years.

The evergreen Manchester United midfielder scored a tremendous goal against Benfica on Wednesday night and will be eager to face Andre Villas-Boas' Chelsea side after playing a key role in the Blues' Champions League downfall last term.

"Yes, it's slightly strange I suppose seeing managers younger than me," he admitted to MUTV. "I mean he's obviously had a successful time at Porto and Pep Guardiola is only 40 so it might be a trend that is starting to happen."

United's infusion of young talent into the side is ensuring Giggs remains hungry and in tip-top condition as he looks to extend his record-breaking run in the club's first-team.

"I think I'm just enjoying it," he stressed. "Enjoying the challenge each season. The young players carry you through at times in training, when you're feeling a bit down or a bit slow, they are nipping at your heels and just dragging you on. They're making you feel sharp and train that much harder.

"Of course, with the manager and all of your other team-mates, you don't want to let them down. You constantly want to keep the quality you've had during your career, although my game's changed, I've still got to try and contribute to the team which, hopefully, I will carry on doing.

"I've not got any targets at all. If I pass these milestones then it's great but I've never set myself any targets. I try and enjoy it and try to win things. It's what I'm doing. Every moment, every week, every season is a bonus to me now.

"I was getting ready to finish two or three years ago but I'm still enjoying it. It's why I'm carrying on. If I start not enjoying it or feel I'm not contributing to the team, I'll call it a day.

In terms of a future beyond his playing days, Giggs still has no firm plans in place.

"I don't think any players are really ready for retirement," he explained. "Ask a player what he misses and most players don't miss training, nor games. What they miss is going in to training and having the banter, seeing the team spirit. So it's tough to say you are going to miss it.

"The buzz of going out at Old Trafford for big league games and big Champions League games and the feeling you get when you win a game - I'm going to miss all that.

"You just prepare yourself as much as you can, but there's just so much concentration on playing, it's difficult to do that - especially at the start of a season. Maybe at the turn of the year, if I know I'm going to finish or am feeling I'm going to finish, I'll just start trying to prepare myself a little bit more."