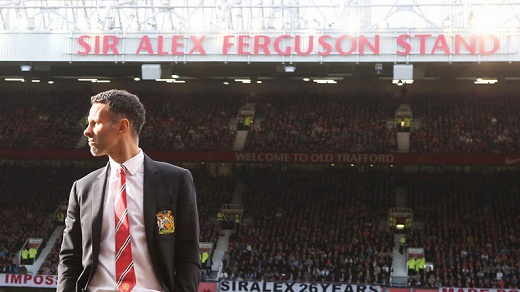 Ryan Giggs is preparing for the visit of Sunderland and faces questions about whether Louis Van Gaal is the man to take charge at Old Trafford. James Cooper of Sky Sports News was there to see how the Welshman handled the media...

A second week in the spotlight for Ryan Giggs and a second week of questions about another manager.

Last time round at Carrington he nimbly dodged questions about the departure of David Moyes, now the focus has moved onto Manchester United's succession planning with Louis Van Gaal the overwelming favourite to jump into the Old Trafford hotseat and although Giggs is perhaps his closest rival he's well aware of the Dutchman's credentials.

The hearts of Manchester United fans seem to favour one of their own, a true club legend, assuming permanent control while their heads, perhaps, recognise Van Gaal's experience and track record put him in pole position ahead of a tricky transfer window.

In the meantime it's Giggs who's making the decisions and putting pre-season plans in place. He may have played alongside Rio Ferdinand and Patrice Evra, now he's answering questions about their futures at Old Trafford.

"It's their decision," he said. "Their contracts are up but they've both given massive service to the club.

"They're both fit and they both looked good last week so I don't see why not. I think they remain assets to a club like Manchester United."

Last summer a number of factors combined to make it a disastrous transfer window for a club that had just won its 13th Premier League title.

Whatever the facts surrounding David Moyes' first stint in football's fast lane, Manchester United ended up with a single arrival in the dying moments, since then £27m-man Marouane Fellaini has made just 11 Premier League starts.

This summer, whoever's chosen to pick up the reins from Moyes will have the club's biggest ever transfer kitty at his disposal coupled with the pressure to sign the necessary players to restore Manchester United's fortunes at home and abroad and Giggs is well aware of the challenge ahead.

"If the players are out there you try to get them, if there are players that can improve you and take you forward, you try and get them."

Manchester United's current squad will be remembered for breaking an 18-year cycle of continuous Champions League football and even the Europa League looks beyond them with just three games remaining.

At the other end of the East Lancs Road, Liverpool's Premier League title tilt may have been aided by their absence from Europe this season but Ryan Giggs isn't prepared to accept a similar fate as an advantage for the club's next manager.

So what of Ryan Giggs the player? He's clocked up a record 962 appearances in the red of Manchester United and won more honours than any player in the English game but like his first game against Norwich will opt for a suit not boots for the visit of Sunderland.

That leaves Tuesday night's contest with Hull as his last chance to play at Old Trafford this season, so will he grace the turf at the Theatre of Dreams again or has he already played his match at the stadium?

He said: "It's not something that I've really thought about, just have to wait and see. See how the team perform on Saturday and, like I say, see if I can get in.

"But my priority is winning the games and is it me playing that gives us the best chance? We'll see."

He was an unused substitute at the Stadium of Light back in October as Manchester United won 2-1 thanks to two goals from Adnan Januzaj and it'll be a watching brief again for Ryan Giggs, but with very different pressures, as he looks to mastermind a performance that'll stretch Sunderland's winless streak at Old Trafford to 23 league games.