Giggs: Scholes is the most talented player I played with 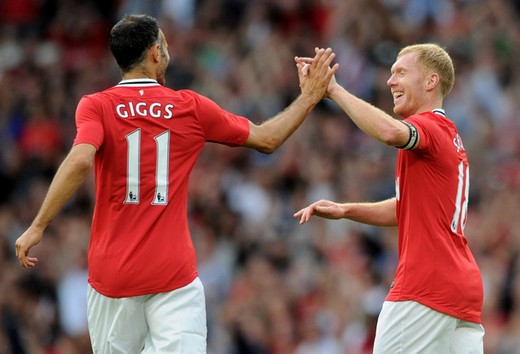 Ryan Giggs says that Paul Scholes is "the most talented player I played with", naming the midfielder in his best XI of colleagues from his Manchester United career.

The Welshman also included Nemanja Vidic, Rio Ferdinand and Wayne Rooney from his current team-mates in the 2012-13 season, as well as picking himself to play on the left flank.

"[Scholes] could do things that no other player could do," the veteran told Abu Dhabi Sports. "He would dictate the tempo of a game, hardly ever gives the ball away – whether it be a five-yard pass or a 30-yard pass."

Giggs, well into his 23rd season at Old Trafford and with over 900 appearances for the club to his name, struggled to decide on a goalkeeper, eventually plumping for Peter Schmeichel over Edwin van der Sar "because Schmeichel was probably at his peak".

Cristiano Ronaldo, now of Real Madrid, also made the 39-year-old's team, with his huge volume of goals since his record-breaking transfer to the Santiago Bernabeu influencing his inclusion.

Giggs named Roy Keane as his captain. "He would drive you on in every single game and he was the reason why we scored so many late goals," the left winger, who has won 33 trophies to date with the Red Devils, explained.

Gary Neville, Denis Irwin, and Eric Cantona were the former Wales international's other selections in an XI that covers the entirety of his spell in Sir Alex Ferguson's squad.