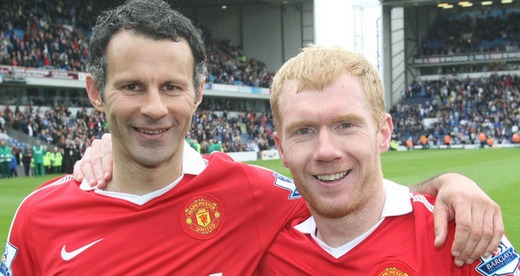 Ryan Giggs admits finding a like-for-like replacement for Paul Scholes is 'impossible', but is confident Manchester United can continue to evolve.

Scholes called time on his illustrious United career at the end of last season and Sir Alex Ferguson was linked with several midfielders during the summer as he pondered signing a successor to the former England international.

Inter Milan schemer Wesley Sneijder was heavily linked with a move to Old Trafford, but Ferguson recently admitted the Dutchman was not the perfect player to replace Scholes.

And the long-serving Giggs also felt it was almost a pointless search, knowing that someone of Scholes' ability simply cannot be replaced.

"Will you get another Paul Scholes?" he said during an exclusive interview with MUTV. "No. Never. Not in a million years.

"Getting someone in like for like is impossible. But the club has to go on. We have to evolve. That is the Manchester United way."

Scholes did not ask Giggs for advice prior to making his final decision, and the Welshman did not feel it right to offer any, knowing his long-time team-mate has such clarity of thought.

However, he does feel the former England star was basing his decision on the standards he set himself rather than those others produce.

"You want to perform at a high level because of the expectations you have for yourself," said Giggs.

"If you drop slightly below, you feel you are not contributing to the team.

"I told him he was controlling most of the games he played in, that is what he was brilliant at, but the longer it went on, I got the feeling he was going to call it a day.

"I would never try and change his mind but I wish he had carried on because he could have done it."

Giggs has no hesitation in declaring Scholes to be his favourite team-mate: "In training, you just couldn't get near him. It was a joy to watch."