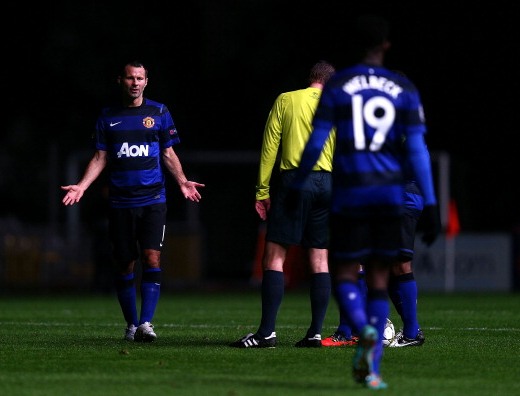 Ryan Giggs has hailed the manner in which Manchester United have bounced back from last season's European disappointment and called on the Reds to continue the team's current winning form.

Victory against Braga on Wednesday night secured qualification to the Champions League knockout phase with two games to spare, a year after Sir Alex's men tumbled out of the competition.

"We were all disappointed [last season]," Giggs told Sky Sports. "It wasn’t good enough. We knew we had to do something about it and we have.

"We hope this continues now. We’re in good form, both in the league and the Champions League, so we have to carry it on now."

United's win at Braga was far from straightforward. The Reds went behind early in the second half before floodlight failure at Estadio AXA caused a 10-minute stoppage. When the game resumed, the home team continued to look the likeliest to score until Robin van Persie came off the bench and pulled United level with 10 minutes to play.

Wayne Rooney then won and converted a spot-kick to send the Reds in front before Javier Hernandez wrapped up the points in injury time.

But it was van Persie's coolly-taken equaliser, his 11th for United since his summer transfer, that had Giggs purring.

"Robin gets one chance and he puts it away," Giggs said. "He’s just scoring goals for fun at the moment. With the form he’s in, his confidence is high and I think everyone knew he was going to score."