Giggs pride at being the Topps stickers man for all seasons 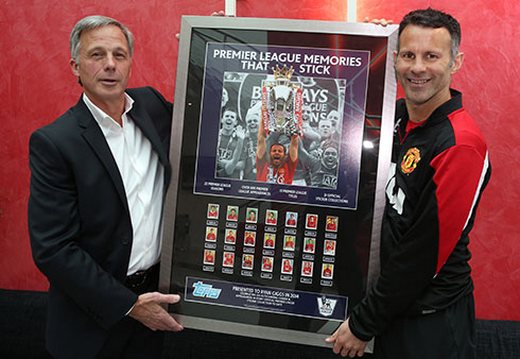 Manchester United legend presented with framed collection of his stickers over past 21 seasons by Topps, official supplier of Barclays Premier League stickers

As the only player to have played in all seasons of the Barclays Premier League with Manchester United since the competition started in 1992, Ryan Giggs is also the only one to have been part of every official Premier League sticker collection to date.

To commemorate this feat the 40-year-old was presented with a special souvenir by Topps, the official supplier of Barclays Premier League stickers, a framed collection of his stickers over the past 21 seasons.

Topps estimates that since Giggs first appeared in the Barclays Premier League more than half a billion packets of stickers have been manufactured by TOPPS (or Merlin as it was known when the competition started). Of this more than seven million stickers of Giggs have been printed.

For Giggs seeing himself over the course of 21 seasons is a source of pride.

"It's a bit daunting seeing the haircuts over the years but, it's great to get it off TOPPS," Giggs said in an interview with the Premier League World TV show that will be broadcast this week. "It'll go up in the house and I'll show my kids. It’s been a long time."

Giggs says he gets a some stick from his team-mates over how his hair has gone from long, black and curly to short and greying but the opportunity to see himself over the years brings good memories of his career, such as winning the Treble of the Barclays Premier League, FA Cup and UEFA Champions League in 1999.

"It's great to reminisce and see the different kits and you remember different parts of that particular season," he said. "I like the early kits because it's when I first came into the team, but I also like the '99 kit as well, for obvious reasons.

"It was a successful year, that year and you always tend to remember the kits that you did well in rather than the ones that you had disappointments in."

The Welshman admits that at the beginning of his career it was "strange" to be  a collectible item for his peers.

"Obviously you're not long out of school and then you have got your mates or, your mates' younger brothers or sisters collecting stickers of you so, it's a bit surreal, but fun at the same time," he said. 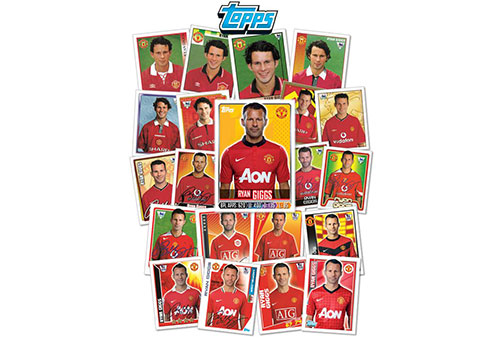 Asked whether his sticker having been collected by two generations of football fans reminds him of his age, Giggs says that thanks to his team-mates, he is not fazed by this.

"I get reminded daily how old I am, so it’s nothing new," he said.

Chris Rodman, vice-president and group managing director at Topps Europe, was proud to be able to hand over the special souvenir to Giggs.

"Ryan’s presence in all our collections is a true testament to his skill and performance at the very highest level"
Chris Rodman, TOPPS

"Ryan Giggs has achieved more than any other player in the Premier League’s 22-season history. In a career that has seen him accumulate 13 league titles and over 600 league appearances, he can add the rare accolade of being the only player to appear in every official Premier League sticker collection to date.

"For over two decades now, football fans have enjoyed collecting, sticking and swapping, and Ryan’s presence in all our collections is a true testament to his skill and performance at the very highest level. It's a huge pleasure to have featured such a great professional that continues to inspire millions of children who are not only passionate about the game, but who love showing their support for Barclays Premier League football through the pastime of collecting and swapping Topps stickers."