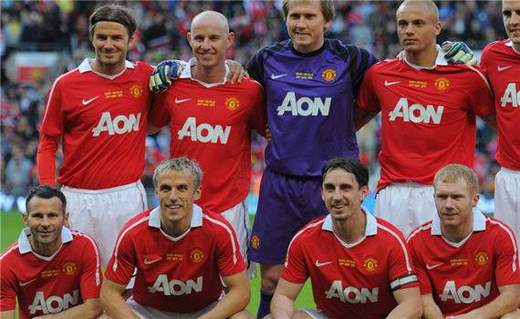 The trio, who graduated from the same United youth team in the mid-1990s before having stellar first-team careers at the club, have all been discussed for what is expected to be a single backroom position.

It is not yet known if Sir Alex Ferguson’s No2 Mike Phelan and first-team coach Rene Meulensteen will remain in their current posts under the new regime.

Nevertheless, Moyes, who will officially replace Sir Alex as manager on July 1, is expected to appoint a senior coach who is a member of the United old guard and can be a conduit between the dressing room and the coaching staff.

The three men in the frame are 39-year-old midfielder and record United appearance-maker Giggs, Everton defender Neville and Butt, who has been coaching the club’s youth-team players for seven months.

Giggs, who has already completed his coaching badges, was pictured meeting Sir Alex and Moyes at a Cheshire hotel on Monday and could be offered a player-coach role.

Like Giggs, Neville, 36, also has management aspirations. He has announced that he will leave Everton at the end of the season, and England have confirmed that he will help coach the Under-21s at this summer’s European Championships.

Butt is the lowest profile of the trio but he is already making his mark as a coach. The 38-year-old has been coaching various United academy teams since last October, predominantly assisting Under-18s manager Paul McGuiness.