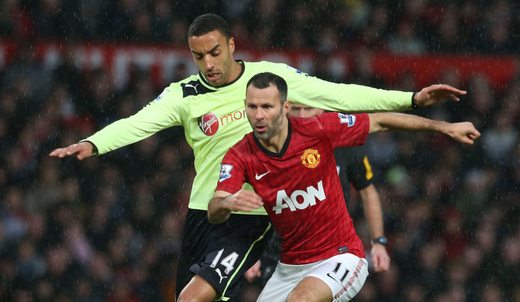 With United in exactly the position Sir Alex always wants his team in as we approach the turn of the year, Ryan Giggs insists staying at the top of the Barclays Premier League is the squad’s main focus for the foreseeable future.

Despite a worrying pattern of conceding goals, the Reds have still managed to get themselves into a commanding position at the head of the table with nearest rivals Manchester City seven points adrift.

United had a healthy lead over the Blues towards the end of last season, however, and saw City claw it back and claim the title in agonising fashion on the final day of the campaign. Giggs says that harrowing experience means no-one at Old Trafford is taking anything for granted, with the Reds instead eyeing a winning run over the course of the next few months.

“I think it’s the manager’s experience and the players who have been here a long time knowing that after Christmas is the time to get down to business,” he told ManUtd.com. “We know that as long as we’re there or thereabouts in January and if we go on a [winning] run of 10 or 12 games we’re going to have a great chance of winning something. We know it’s a key time and we’ve got to start performing and there can be no mistakes. Usually when the stakes are high and the concentration is there, good players produce the goods.

“We were probably this many points ahead with less games to go last season so we’re only halfway there and there are a lot of tough games to come. There is also the FA Cup and the

Champions League to come as well so we have all these things to consider. We’re in a great position and we’re happy where we are but we know we have to carry on producing.”

Next up on the Reds’ radar is a New Year’s Day trip to Wigan. United saw off the Latics comfortably earlier this season with a 4-0 win at Old Trafford, but the squad’s memories of the last visit to the DW Stadium are less memorable.

“Last season when we went there we didn’t play well and Wigan were in good form and we lost 1-0,” recalls Giggs. “We knew they were in a false position going into that game and that they were playing well. When you don’t turn up and you play a team in good form you’re always going to come unstuck no matter who you play in the Premier League. It was tough especially when you consider our [good] record there and it undoubtedly contributed to us losing the title.

“Wigan are a tough team to play against. They play with a different system to what we’re used to and they play it well. I’m surprised that they’re down there [towards the bottom of the table] considering the tough game they gave us last season and this season at Old Trafford where they played well. Roberto Martinez has got his own system and it’s very tough to play against, so we’ll need to play well.

“Christmas is a busy time. When you’ve got four games in nine days you’re going to get different results and things will change. The most important thing is not to panic and just look after your own results and your own performances, and hopefully we’re in a good position come January.”