Giggs: It was tough 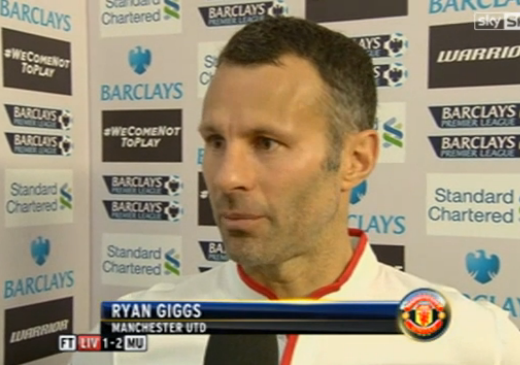 Ryan Giggs was pleased with the three points at Anfield but disappointed with the overall performance.

The United skipper refused to entertain any thoughts that the occasion affected the display as he instead paid credit to Liverpool for their showing, particularly with 10 men following Jonjo Shelvey's first-half red card.

Rafael equalised Steven Gerrard's opener with a perfectly-placed curler before Robin van Persie kept his nerve to score the winner from the spot.

"I think, in the last three or four years, we've come here and played a lot better and lost," he told Sky Sports. "That's the way it goes sometimes.

"It's always tough, especially against a team like Liverpool who keep the ball well, even when they go down to 10 men, they don't change. The crowd got up and we didn't play well. We didn't keep the ball well enough. It was great to see Rafa's goal go in and it probably lifted us.

"I think it's a tough place to come. Obviously, Liverpool wanted to put on a performance because of the occasion and they did that. I think Liverpool made it tough for us but we could have played better."