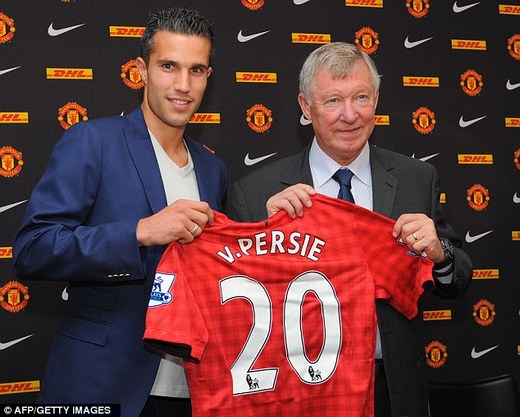 Ryan Giggs tells ManUtd.com he is excited by the arrival of new signing Robin van Persie and says his acquisition gives Sir Alex some “mouth-watering” options in attack…

You trained with Robin for the first time yesterday – how did he look?
He looks good. You can see just from one training session the qualities he has which we know all about anyway because of all the times we’ve played against him. He brought that lift to training that a top player brings and that all bodes well.

It’s obviously an exciting signing for the fans – is it the same for the players?
Oh yeah. The players are just like the fans in terms of talking about who we might sign and wondering which players might come in. It’s always very exciting for us when we sign new players because you know that whoever comes in with have a lot of quality and will help improve the team.

Aside from goals, what will he bring to the squad?
His movement is so good and he’s got a real presence. He’s big and strong with a great left foot and he scores all types of goals – poacher-type goals, goals from long distance, free-kicks, penalties… he’s just an all-round top player. And he’s improved so much over the last few years as we’ve seen by his performances and his goals.

What’s he like as a person?
He’s good guy and he’s fitted in really quickly with the lads on and off the pitch. It’s a good dressing room to come into to be fair – there’s a good team spirit and the lads are always great at making a new player feel welcome. All the new players have been welcomed into the dressing room – Shinji, Nick and now Robin and they’ve all settled in well.

"It’s always very exciting for us when we sign new players because you know that whoever comes in with have a lot of quality and will help improve the team."
- Ryan Giggs

Some people have talked about van Persie being that bit older than the type of signings the manager has tended to make in recent years, but there’s no reason to say Robin can’t go on for as long as you have is there?
Absolutely. Football has changed so much – it used to be that once you turned 30 you were on that slippery slope, but these days players look after themselves a lot better and the whole sports science side of the game has changed whereby players can go on and produce better football for much longer after 30. We know the manager likes to buy younger players and see them develop here, but now and again when there is a player out there who is that little bit older and more experienced then he’ll go for it. It’s a good balance to have.

The manager certainly has plenty of options in attack now…
Yeah he does and it’s exciting for him, the players and the fans and it’s the manager’s job to juggle all the players and pick the right systems for the right games. We all know that if you go on cup runs and Champions League runs that you need that strength in depth in the squad because you’re going to get injuries and suspensions and dips in forms, so you need a big squad to compete at the top.

And he’s just the type of player the likes of Welbeck and Chicharito can learn from isn’t he?
Of course. They’re young lads and good lads who want to learn. They’ve already learnt a lot from Wayne and you’ve seen the improvement from both players. Any player looks at the older lads who play in their position and what you can take from them and improve upon by watching them, and there’s no doubt Danny and Chicha will learn plenty from Robin.

A lot of fans are particularly excited at seeing Wayne and Robin play together…
Yes understandably, but no matter what partnership the manager goes with up front it looks mouth-watering. It’s not just about the type of goals we know all the strikers can score, but the movement they have and their all-round play. Whoever the manager puts out there will do well I’m sure.

Are you confident you can get a place in that front six?!
[Laughs] It is a worry! It’s a long season with so many games meaning there will be plenty of opportunities for everyone so hopefully I can get a game here and there!