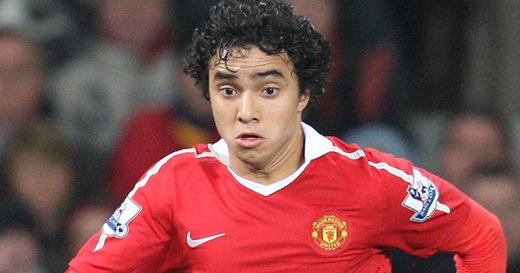 Ryan Giggs reckons Manchester United team-mate Rafael will be a top player if he continues his recent progress.

The Brazilian full-back is available again for Tuesday night's trip to Blackpool after serving a one-match ban.

The 20-year-old was forced to apologise for his behaviour after being sent off at Tottenham last week, incurring an £8,000 fine for confronting referee Mike Dean.

Rafael's temperament and discipline was questioned after making the first-team breakthrough at Old Trafford.

But Giggs feels the youngster has learned from his mistakes, hailing his new-found maturity and saying the red card at Tottenham was merely unfortunate.

"Rafael has come on in leaps and bounds over the last few months," he said. "I have seen a massive improvement, not only in the way he plays but within him as a person.

"I come up against him in a lot of training sessions because we play in opposite positions and I have seen the maturity develop over the last three or four months.

"If he keeps developing he is going to be a brilliant player."

Rafael's recent form means he is now being seen as a long-term successor to Gary Neville at right-back and Giggs is confident he has the hunger to succeed.

"You can't teach that, the enthusiasm Rafael brings to the game when he makes those forward runs and dribbles past people," said the United veteran.

"Players rely on that appetite. He was really unlucky to get sent off at Tottenham but when you are young you do make little mistakes.

"All you hope is that the individuals concerned learn from them and get better."

The same enterprise has been shown by Blackpool following their unexpected promotion last season as they have not only defied the odds but done so in style.

"They have been a breath of fresh air this season because they have gone out and attacked teams," said Giggs.

"They have the mindset that they will try and score goals, even if it means conceding a few. There has been so many exciting games involving Blackpool, which is a credit to them.

"That is a great thing to have. I am sure it will be the same when they are facing us."