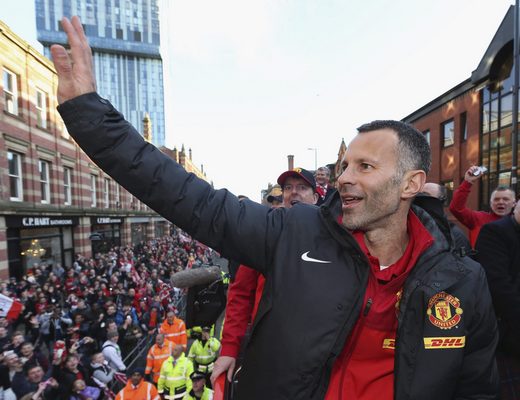 Ryan Giggs has been there and seen it all - but even he was astounded by Monday’s Barclays Premier League trophy parade around the streets of Manchester.

And despite havig mixed feelings following the announcement of Sir Alex Ferguson’s decision to retire at the end of this season, the Reds icon was delighted his mentor could walk away from Old Trafford with yet another title winners’ medal hung around his neck.

Speaking to MUTV about Monday's events, Giggs said: “It is just brilliant. Obviously, it gives us a chance to share this great achievement with the fans and they have turned out in their thousands - it’s an amazing atmosphere.”

Ryan went to say: “There have been mixed emotions with the news that the manager is leaving. It has been hard, it has been tough, especially for the players who have known him for a long time, but I am happy and delighted that we could end on a high by winning the league in his last season.”

Of course, the parade came hot on the heels of Sunday’s 2-1 win over Swansea City, Sir Alex's final home fixture in charge of the Reds – an event which inspired one of the most captivating atmospheres in years.

The manager's last Old Trafford outing also charged the emotions on Monday evening and Giggs was keen to point out similarities with the 1999 Treble-winning parade, when thousands of supporters lined the streets of Manchester in what were then unprecedented scenes.

“I think the parade is brilliant. In 1999, that was probably my greatest memory. I remember turning down Deansgate and not being able to see Deansgate for all of the fans. Tonight is going to be similar to that.

“But I must say, the atmosphere yesterday and the way all of the fans had their own flags, I’ve never seen Old Trafford like that and it was brilliant for the players. It was a great end to a brilliant season.”