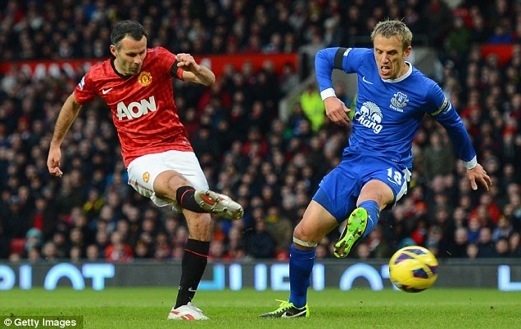 Focus and concentration were the buzz words for the Reds' longest-serving player in his post-match interview, as he assessed a job well done by the runaway league leaders.

"We had to have the concentration, we knew what happened here against Everton last year, they're a tough side," said Giggs. "We knew that if we concentrated, we'd have a great chance."

Giggs took the first goalscoring chance that came his way, beating Tim Howard via the same post that was struck without success by Robin van Persie moments earlier.

"Obviously it was an important goal in the game, that was the main thing," reflected Ryan, who has now maintained his record of scoring in all 21 Premier League seasons.

"My goal set us off and after that we played some good stuff. We had to really, against a really good Everton team. The main thing was obviously getting the result. The performance wasn't as important but I think we played well."

The victory was the Reds' 12th in 14 league games since the shock November defeat at Norwich, with the other two matches being the 1-1 draws at Swansea and Spurs. The destiny of the 2012/13 title race is now firmly in United's grasp, and Giggs feels there is enough quality and crucial know-how at Old Trafford to complete the mission.

"If we continue the good form and get the results, we'll be okay," he said.

"We've got enough experience in the squad but you never take anything for granted. We've just got to keep playing well. The strength of the squad should see us there if everyone stays fit. But you never know what happens. You've just got to concentrate and do our job."

With the Everton match safely done and dusted, Giggs allowed himself a glance at the next game on the horizon - Wednesday's trip to the Bernabeu as the UEFA Champions League resumes.

"It doesn't come any bigger than playing Real Madrid, it's a fantastic match. We'll look forward to that now."