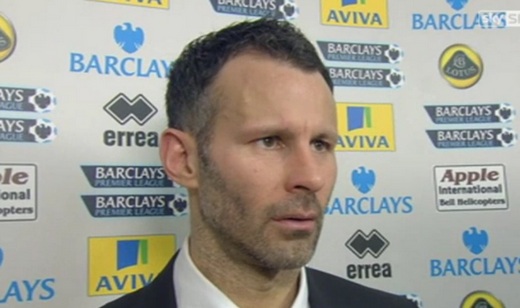 Ryan Giggs hailed his match-winning goal on his 900th appearance for Manchester United against Norwich as 'special'.

The Canaries were beaten 2-1 after the veteran winger's stoppage-time winner at Carrow Road.

Paul Scholes had given the visitors an early lead only for Grant Holt to restore parity with seven minutes remaining.

But after Giggs' late effort, the Welshman said the moment was very special for himself and his side.

He told Sky Sports: "Yeah, it was obviously special and Norwich made it a tough game for us and they played really well. To score late on is always nice and to get the winner is a bonus.

"We knew how important a time it was (with the celebrations). Obviously (Manchester) City put pressure on us yesterday (Saturday) winning so we knew we had to come here and win. And obviously you see the delight of the players when the goal went in, late on.

"Right through the squads and right through the teams that the manager has managed they've always not given in and always scored late goals. This team is no different and we only started playing after Norwich scored and we could have scored three or four."

Asked why that happened as it can frustrate fans when a team only start playing once they concede a goal, Giggs said: "It's a mixture of a couple of things. I think Norwich were wondering whether to stick or twist. Whether to go for that winner or sit back and try and get a draw but there was a bit more urgency in our game, which was probably lacking early on in the game, so, with some of the attacking play in the final ten minutes, we could have scored a lot of goals."

And on his landmark appearance, he added: "It's a special day. To play 900 games for this club who I've supported and grown up with and especially to score the winner, it's a great day for me."