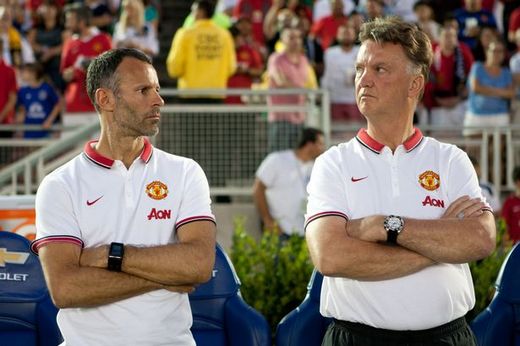 Ryan Giggs believes United’s players will have to win back the fans after a disastrous campaign last year.

After winning the Premier League title by 11 points in 2013, United finished seventh last season. It cost David Moyes his job and prompted the club to bring in Louis van Gaal.

The Dutchman’s arrival has raised expectations at Old Trafford, especially after he led Holland to the semi-finals of the World Cup.

But Giggs, who has ended his 24-year playing career to become Van Gaal’s right-hand man, insists the players still have work to do to win over the supporters while the humiliating memories of last season are still fresh in the mind.

The new era started positively with a 7-0 thumping of the LA Galaxy in the Rose Bowl on Wednesday night.

But Giggs insists there’s still some repair work to do.

“There’s no doubt that few players lived up to the standards of what they are capable of doing last season,” he admitted.

“They are not bad players. They are all good players. It doesn’t change overnight but last season’s league position showed that we didn’t perform individually or as a team.

“The way back for them has started already, in training. There is no time to waste.

“The World Cup means that some don’t have much time to prepare but the recovery has to start now, getting some kind of form going into the Swansea game.

“The players have got to take a bit of pride in how they perform, train and play.”

The noises coming out of United’s American training camp are that the early signs are encouraging. And privately the players have already been impressed with van Gaal’s sessions.

But Giggs says he learned quickly during his four games as caretaker manager at the end of last season that performances in training are not always replicated on the pitch.

He was critical of his team after the 1-0 home defeat to Sunderland in May, his strong words captured by the ITV crew filming a documentary about his time in charge.

“You want to impress in training and in games,” added Giggs.

“When a new manager comes along, you want to be on that team sheet for the first game against Swansea. You do everything that you can.

“I’m confident they will show it (in games next season). They have shown it so far in training. That is why I was so disappointed after the Sunderland game because the team I put out would have won if they had played to their potential.

“The training is good and they are enjoying it. It’s perhaps a little bit different to what they are used to. But it’s a different manager with different ideas and a different philosophy.”

With Giggs now Van Gaal’s assistant, and after taking charge for the last four games of last season, the inevitable conclusion is that the Welshman is being groomed to become the next United manager.

When he was asked about his ambitions to manage the club before the Champions League tie with Bayern Munich last season, a press officer had to step in to bat it away.

But that had more to do with the fact that Moyes, under pressure and under fire, was sat in the next seat.

Giggs makes no attempt to hide his desire to become a manager one day. But, for now, he insists he’s happy to learn from a man with vast experience in the job.

“I am just going to try and be a better coach and grab as much experience as I can,” he added.

“Learning from Louis van Gaal will, hopefully, take me towards being a manager one day and a good manager.

“His CV speaks for itself. He has managed at big clubs and he is coming in to the job off a successful World Cup so, recently, he has shown what he can do.”

Giggs holds his new boss in such high regard that he admits he was ‘flattered’ to be asked to contribute to the former Barcelona and Bayern Munich manager’s coaching team.

“He was pretty direct about it,” said Giggs.

“It was after about half an hour, 40 minutes of meeting him.

“He straight out asked – or did he tell me? He might have told actually! ‘You’re assistant manager.”

“He said ‘I want you to be my assistant’ and when someone like that does, it was great for me and I didn’t think twice.

“It was, obviously, a tremendous opportunity for me to learn off one of the great managers and to stay at the club and to try and get better as a coach.”