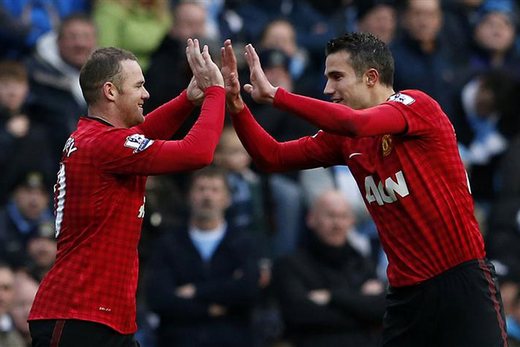 RYAN GIGGS says Wayne Rooney is as happy making goals as scoring them — just like his former team-mate Cristiano Ronaldo.

Roo’s quiet season has exploded into life in December with two goals at Reading followed by another double in Sunday’s Manchester derby.

But Giggs reckons his Manchester United pal contributes so much more to the side than just his goals.

Giggs, 39, said: “Wayne is the kind of player who can score goals but if someone is scoring more, he’s not too bothered.

“He’s quite happy setting goals up and pitching in with important goals like he did on Sunday.

“It’s like when Cristiano was here. He scored a lot of goals but, like Wayne, he’s not just an out-and-out goalscorer. He’s more than that.

“Wayne is the catalyst to everything good that we do. He can score goals, make goals.”

Rooney, 27, has seven goals this season for United. But in some ways he has been overshadowed by the stunning impact Robin van Persie has made. The £22million Dutchman’s last-minute winner at City was his 13th goal since quitting Arsenal for Old Trafford in August.

Giggs said: “Robin has not surprised me because at 29 I knew he was a ready-made, experienced, world-class player.

“But he just has that bit of class that can make a difference — like it did on Sunday.

After the euphoria of beating their bitter rivals, it will be back to basics for United on Saturday as they face Sunderland. Rooney has not trained much this week as he has been suffering from a bug but United expect him to be fit to face the Black Cats at Old Trafford.

And Giggs admits Alex Ferguson’s side have struggled most in games they are expected to win.

He added: “Our best performances have been the games where you don’t need motivating.

“It can be different at Old Trafford against a team you are supposedly going to win against.

“We found this season it is tough. Teams are getting 10 behind the ball, making it difficult. We’ve sometimes struggled.

“But the confidence and the quality we have in the squad at the moment, we should be kicking on now and going on a good run.”

Stand-in skipper Patrice Evra said the whole United squad will deserve to be sacked if they fail to win the title after going six points clear.

But Giggs fears City’s lack of European action will help their title bid.

And he believes it is vital United try to stay clear of their closest rivals during the hectic Christmas period.

The Welshman said: “At the turn of the year you start looking at who is around you, what teams are playing who — where you expect to get points, where it will be tough.

“We are still in the Champions League, City aren’t, Chelsea are in the Europa League. City will have the week to prepare whereas we might have tough European games.

“We’re used to playing Wednesday-Saturday. It all depends on when the games are, who we’ve got.

“If it’s Wednesday then 12.45 in the Premier League on the Saturday, it can be tough.

“It’s just up to us to make sure we don’t drop points around that time.”