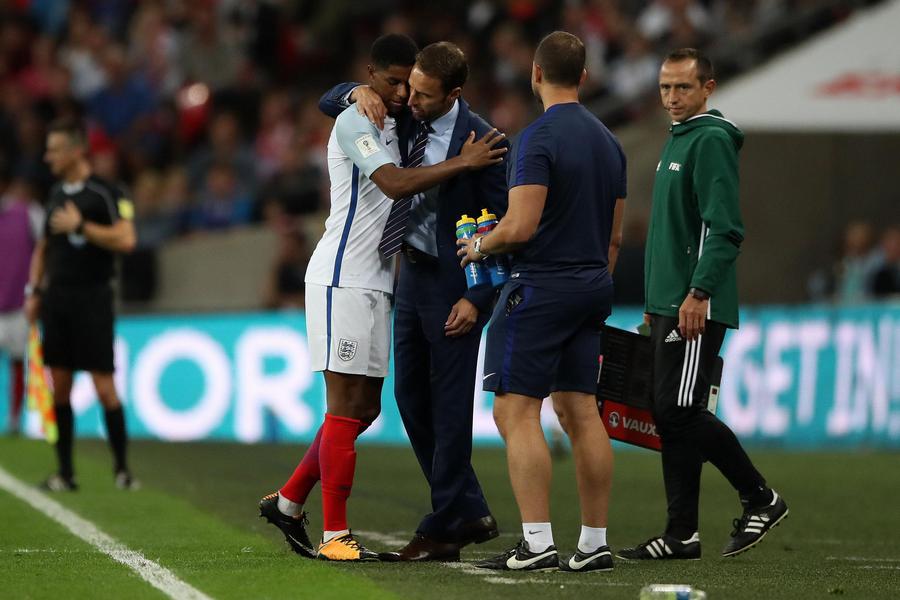 Gareth Southgate has revealed that he sought advice from Ryan Giggs about England hero Marcus Rashford.

The Manchester United star recovered from an early mistake, which led to Slovakia’s goal, to assist Eric Dier’s equaliser and score the winner — his first competitive international goal — as England took a huge step towards World Cup qualification.

Southgate insists he’s known about the 19-year-old’s talents for a while, thanks in part to a conversation during his spell as England Under 21 boss with United legend Giggs, who was the club’s assistant manager when Rashford broke through.

‘We used to speak to Ryan about which team to put him in because we didn’t want to put him in the Under 21s too early,’ said Southgate. ‘We felt it would put too much spotlight on him and United were grateful for that.

‘But then Roy Hodgson picked him for the seniors two months later, so that plan was out the window. You could see the impact he had straight away.

‘United prepare their players well, which is why they end up the way they do. To play in front of 70,000 people every week, they bring them up in a way that you know the kind of player they will be before they walk through the door. We have had Marcus, Jesse Lingard, Michael Keane, so there is a type they develop because they are given good values.’

Rashford believes England could be on the cusp of something special. ‘Hopefully we can be together for years and this can be the start,’ said the forward.

‘Provided we all stay together and we all work on relationships off the pitch to make us better on the pitch, hopefully it can bring the best out of all of us.’

Meanwhile, Southgate insists Raheem Sterling remains an integral part of his plans despite his decision to drop the Manchester City winger for the game against Slovakia in favour of Rashford.

‘His reaction to being taken off (against Malta) was brilliant,’ said Southgate.

‘He understands we have belief in him. I told him he has a tough mentality. His response in training was good.

‘For creative players there will be nights when it doesn’t work and I have to make a decision whether to give them a bit longer or make a change. With Marcus in the form he was in the other night it was important to make the change.’